AMD will be unveiling its new Ryzen 3000 series processors at Computex 2019 in late-May/early-June, with new 500-series motherboards to join the fray with flagship X570 boards arriving with the first taste of next-gen PCIe 4.0 connectivity, too. 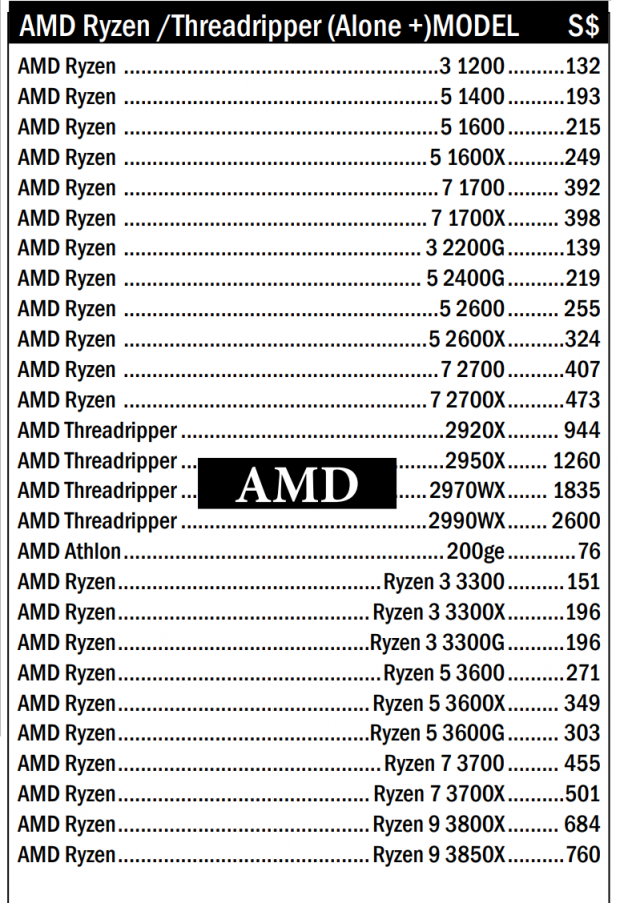 Well, now a retailer in Singapore has released some early pricing on AMD's upcoming Ryzen 3000 processors, a list of prices that is pretty close to the ones leaked in December. We're looking at prices from the Ryzen 3 3300 at $151, to the Ryzen 7 3700X at $501. But it's the higher-end Ryzen 9 3800X and Ryzen 9 3850X that should take things to the next level as they'll be next-gen 7nm Zen 2 CPUs that will reportedly pack 16 cores and 32 threads... Threadripper territory.

The purported Ryzen 9 3800X and Ryzen 9 3850X would compete directly against Intel's Core i9 family of CPUs, but it will offer a thread-busting 16C/32T with higher CPU clock speeds thanks to the 7nm node and Zen 2 architecture improvements. We're looking at the flagship Ryzen 9 3850X coming in at 4.3/5.1GHz for base and boost CPU clocks respectively, while the Ryzen 9 3800X will arrive with 3.9/4.7GHz base and boost CPU clocks respectively.