Fallout 76 may not be the game it should (or could) be just yet, but it's come a long way since launch. The game's journey is far from over and Bethesda plans to roll out a ton of new content throughout this year. 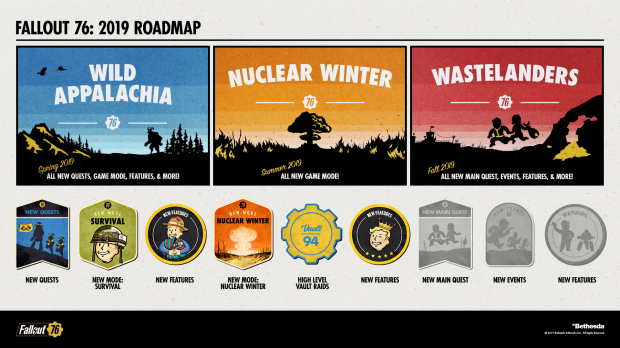 The online-only disaster that was Fallout 76 at launch has morphed into something that more resembles a competent service game (which it totally wasn't at launch). There's still a lot of hiccups, and Bethesda has a lot more work to do, but things are moving along. The studio isn't giving up on their multiplayer Fallout game.

Today Bethesda announced a big roadmap for their experimental online game that sees considerable expansions planned for 2019. Fallout 76 is set to get three major content updates called Wild Appalachia, Nuclear Winter, and Wastelanders, each of which brings new things like modes, quests, loot and features. These expansions will be totally free, and will release across Spring, Summer, and Fall.

Wild Appalachia, the expansion for Spring 2019, will include a bunch of new quests and a new survival mode that promises "high-stakes PVP". I'm not too sure about that myself... The next two updates are more nebulous, but Nuclear Winter will have a new mode set in the atomic wastes that offers a "new way to play." 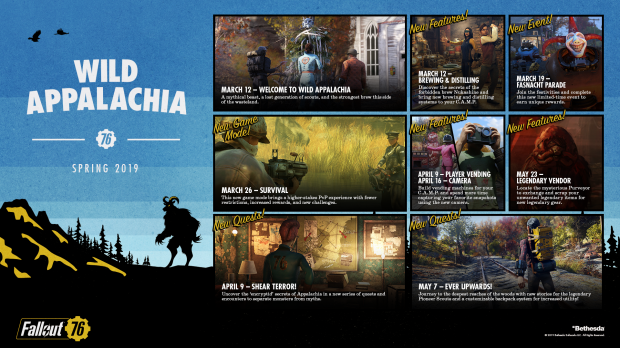 Fall's Wastelanders promises to be the biggest Fallout 76 update yet. There's no mention of NPCs or anything like that, but Wastelanders will offer a big new story arc with consequences. We're not sure what to expect, but I really really hope meaningful NPCs can be put in at some point, in some way. Remember that Bethesda has to make the game meaningful and fun before it just lobs on more content and monetization options; fun is the most important element to any live service game and is the main motivator for engagement.

Check below for more info on each expansion:

A mythical beast, a lost generation of scouts, and the strongest brew this side of the wasteland. Welcome to Wild Appalachia - a series of new quests, features, events, crafting systems and more starting on March 12 and appearing over several weeks. Wild Appalachia includes:

Summer will bring another series of major updates to Fallout 76, including Nuclear Winter - an entirely new way to play that changes the rules of the wasteland.

Embark on a tale with true choice and consequences in Wastelanders - our biggest and most ambitious update for 76. Wastelanders will include a new main questline, new factions, new events, new features and even more surprises.