Team Ninja, the developer behind the coming Dead Or Alive 6 has announced that the title is now delayed until March 1st. This announcement comes just weeks out from its originally planned release date.

The announcement has been posted onto the official Dead Or Alive and Team Ninja Twitter account, as well as in press release format. KOEI TECMO's Producer and Director, Yohei Shimbori has given a statement to as why Dead Or Alive is being delayed, here is what he had to say "The title's development is already near complete; however, we would like to take more time to further polish its balance, gameplay, and expressivity. In return for your patience, we commit to bringing you the best DEAD OR ALIVE gaming experience."

In conclusion, Shimbori apologizes to his fan-base saying "I am truly sorry for the inconvenience caused by the release delay of DEAD OR ALIVE 6." The official release date for the title has been moved from the previously scheduled February 15th to the now solidified March 1st, 2019. Hopefully this doesn't mean that Dead Or Alive 6 is unstable mess when it releases, usually delays right before when a title is meant to launch could suggest that it is riddled with unfixed development problems. Lets be optimistic about the current state of Dead Of Alive 6, but also mindfully cautious. 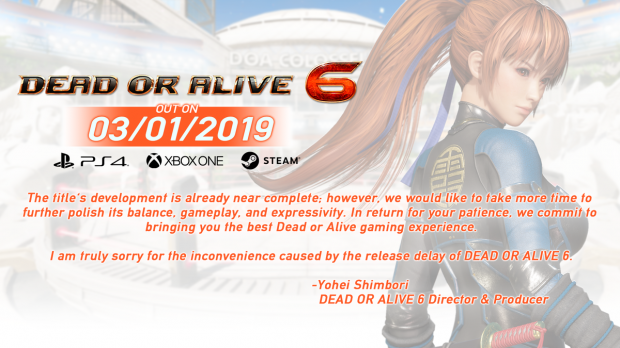