Atari is further branching into the handheld market with a portable Atari 2600, complete with classic games and 1970's wood paneling.

It can also hook up to your TV via an A/V cable for home play, but don't expect dual-screen action. The handheld is a cheaper and more affordable old-school arcade machine that could be competitive in a sea of higher-cost retro mini-consoles like Nintendo's NES and SNES Classic Editions and Sony's upcoming $100 PlayStation Classic.

But cheap is the key word here. The Atari 2600 portable runs on AAA batteries, not rechargeable lithium ion, and brings to mind the power-sucking prowess of Nintendo's Game Boy. Really this is just a plug and play console you can take on the go.

Right now the Atari Retro Handheld is only available for pre-order in the UK and there's no word yet on a U.S. release. In fact it's only listed on Atari's UK site and there's no mention of it on the default Atari.com homepage.

The Atari 2600 handheld is scheduled to launch during holiday 2018. Check below for more info on the Atari Retro Handheld: 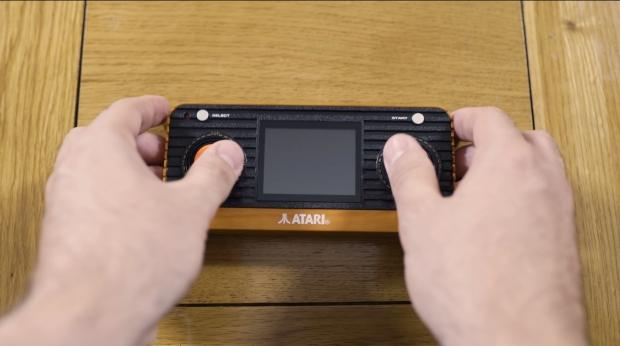