Intel is expected to launch their 8th-gen Whiskey Lake-U processors, with the new range of mobile CPUs to succeed the current-gen Kaby Lake-R processors. Intel will continue using its 14nm++ process, driving CPU clock speeds up and keeping the power consumption low. 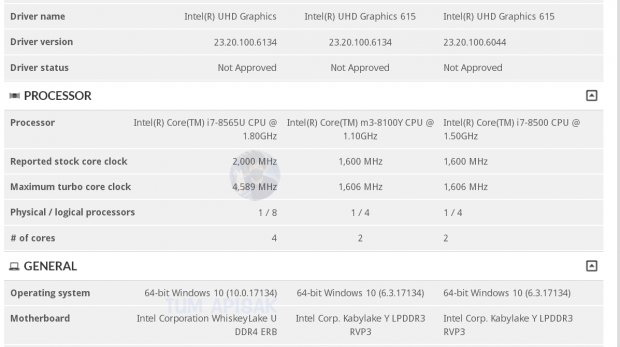 Whiskey Lake-U will include the flagship Core i7-8565U that will succeed the Core i7-8550U, while the mid-range Core i5-8265U succeeds the Core i5-8250U. Both of these processors will be made on the 14nm++ note, with Intel pushing CPU clock speeds up through the optimized process design... but other than that, there's nothing else really new here.

What we will be getting from Intel with the 4C/8T chip in the new Core i7-8565U is an increase of 200MHz base CPU clock and 100MHz increase in the Turbo Boost frequency. As for the Core i5-8265U which is also a 4C/8T part, with a much larger increase in its Boost clock of 500MHz, while the base clock stays the same as the previous-gen Core i5-8250U.

We should expect an imminent launch of the 'new' Whiskey Lake-U processors.