Computex 2018 - Intel unveiled their knee jerk reaction to the news of AMD's impending Threadripper 2 announcement, which until AMD's own Computex 2018 press conference the industry thought it was going to be 24C/48T only.

But it seems Intel's announcement was beyond knee jerk and into the ridiculous, as it is now being reported that the company "forgot" to mention that their "new" 28C/56T processor was overclocked to 5GHz and most tech press thought it was a monstrous 5GHz chip... except it's not.

Our good friend Paul Alcorn from Tom's Harware is reporting that he met with Intel reps yesterday that said that "in the excitement of the moment" they "forgot" to say that the 28C/56T processor was overclocked. Intel PR seems to have all failed here, as the impression most people got was that this was a 5GHz behemoth that would crush Threadripper 2.

During the demo, Intel's Gregory Bryant said: "What's amazing is that trade-off, this actually being a 5GHz in single-threaded performance frequency and not...having to sacrifice that for this kind of multi-threaded performance, so you've got kind of the best of both worlds. So, you guys want to see us productize that thing? Tell you what, we'll bring that product to market in Q4 this year, and you'll be able to get it".

Whatever happened, Intel stuffed up really bad here. Their PR department has been scrambling for months after key people were let go, and now we're seeing disasters like this happen. Threadripper is a 32C/64T monster that fits into the same socket as current X399 boards and first-gen Threadripper, with AMD really in their stride with second-gen TR.

Intel on the other hand is needing to use advanced cooling and power delivery systems to get 28C/56T up and running at 5GHz in some form, with thinly veiled tricks. I've heard that the company has been pushing the limits of physics with the new processor, going as far as blowing circuits in their R&D labs to get it working. 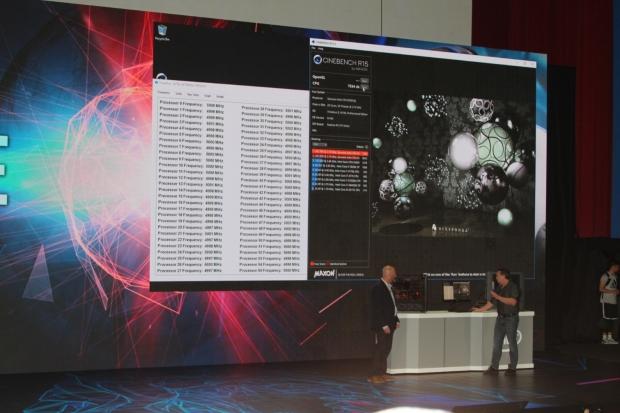