Obsidian has announced the release date for the anticipated sequel Pillars of Eternity II: Deadfire. Accompanied with the release date is also the information regarding pre-order bonuses for players.

Players that decide to pre-order either the deluxe or standard edition will receive the following in bonuses: St. Drogga's Skull, Beakhead, the Hawk (In-Game Pet) and The Black Flag.

For players that decide they want to purchase the Deluxe edition they will be receiving a copy of the games soundtrack, in-game pet, special items, digital pen-and paper RPG guide, high resolution game map and a guide book.

For further description on each of the added bonuses when pre-ordering visit the Obsidian website or look below as I've provided a screen-shot of the perks. 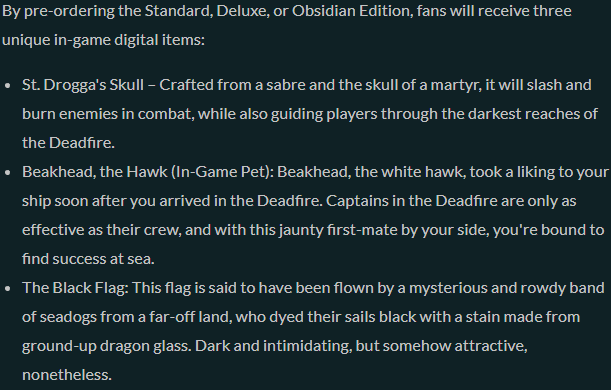