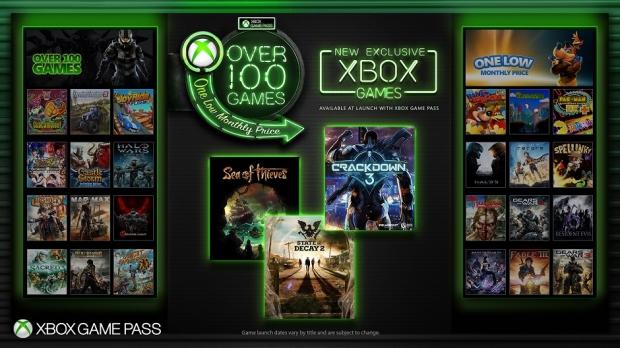 Right now Microsoft's Xbox division is mostly focused on engagement rather than raw hardware sales. The company has leveraged the diversity and power of its Xbox LIVE network to bring new services and player-building content such as communities and other social features in a bid to not only pull more players in, but retain them. As the industry shifts towards digital gaming for the sake of convenience (and revenue earning via full game downloads and microtransactions) it's important hardware-makers follow suit, including Sony, Nintendo and Microsoft. The latter of which has taken an interesting new jump in merging its flagging exclusive games lineup with one of its core strengths: backwards compatibility and digital-based focus.

Microsoft's Phil Spencer has announced that future Xbox games like Crackdown 3, Sea of Thieves, and State of Decay 2 will be available on Xbox Game Pass, which charges gamers on a per-month basis for access to a pool of digital games. This novel step also includes future unannounced games like the next Halo, Forza and Gears of War games--as well as all future Xbox One exclusives to boot.

This sees Xbox being transformed even more towards the digital spectrum and the company reacting and trying to set trends rather than follow in Sony's wake, and so far it's been good for business: Microsoft earned $9 billion from the Xbox division in its 2017 fiscal year thanks in no small part to its engagement strategies.

It'll be interesting to see how this will boost Xbox gaming as a whole, but I think that most Xbox One owners will subscribe to the service just to snag the new games, and the backward compatible titles will just be icing on the cake.