Following up the recent announcement of a new champion for Heroes of the Storm, Blizzard have released a Hero Spotlight for Blaze, the upcoming new hero who is burning his way through the Public Test Realm until January 8th.

Blaze will be joining Heroes of the Storm as ranged warrior tank, his abilities range from slowing down enemies with an oil spill, calling in a defensive bunker for himself and allies and of course burning his opponents to an absolute crisp with his double flamethrowers.

Blaze has strengths in area effect control, where he will be able to zone off enemies using his flame stream and passive damage. Another strength is his sustain, when fighting Blaze opponents will have to be mindful of the healing Blaze gets when he is standing in his flaming oil spill, not only is he tank character with crowd control and armor but he also heals quite rapidly if left in his healing zone long enough.

Blaze will be available on the Public Test Realm until January 8th which will lead into his full release into the live game in the coming weeks. For those interested in reading Blazes full patch notes the list can be found below. 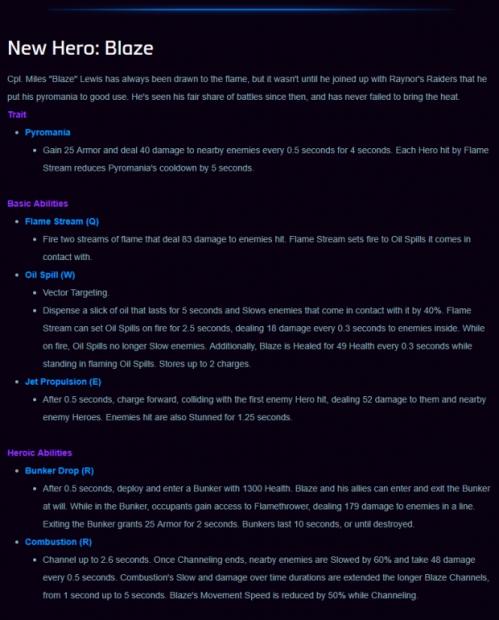