AMD might have teased their Ryzen Threadripper CPUs last week, and after HotHardware released some synthetic results from their Alienware Area-51 gaming PC, LinusTechTips have released some - and by some, we mean a single gaming result from Threadripper.

LTT ran the Ryzen Threadripper up against an X299-based Core i9-7900X at stock clocks and a GeForce GTX 1080 Ti Founders Edition graphics card, and ran Rise of the Tomb Raider in both DX11 and DX12 modes. The results, we have below:

According to these results, it looks like Ryzen Threadripper will handle gaming without a problem - but LTT didn't say what resolution they were running Rise of the Tomb Raider at, but it looks like 4K results to me. Seeing the X299 and Z270 systems at just a few FPS lower than the Threadripper system, and slightly ahead of the X370 system from AMD.

Linus also ran 3DMark with both Fire Strike Ultra and Time Spy benchmarks. X299 still pulls ahead significantly in the CPU test run of Time Spy, while it's pretty neck and neck for the Fire Strike and Time Spy runs.

When it comes to Blender 2.78c, AMD pulls ahead once again. 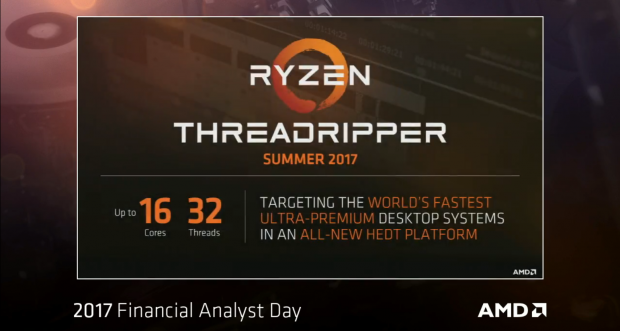