Samsung should announce the Galaxy Note8 this summer, and Evan Blass recently revealed some specs about the upcoming phone.

According to him, the Note8 will feature a 6.3-inch AMOLED display with 18:5:9 aspect ratio. It will come with an S Pen stylus and a dual rear camera setup. Blass reports that the phone won't be powered by Qualcomm's yet to be announced Snapdragon 836, but will instead feature Snapdragon 835, the same processor as the Galaxy S8. However, the device will come with 6GB of RAM. The Note8 is also expected to have a 3,300 mAh battery, which is less than what the Galaxy S8+ has, which seems odd. 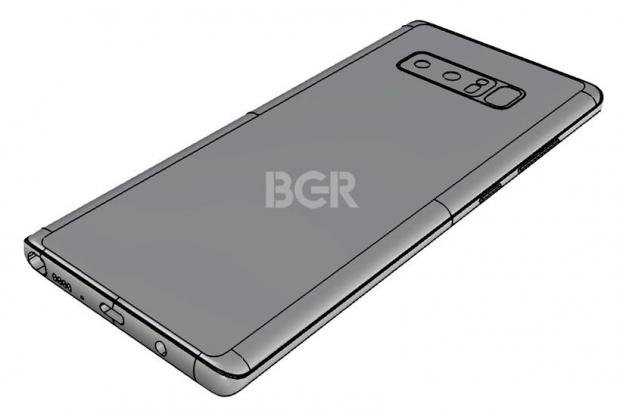 It was expected that the company would resolve the problem and embed the biometric fingerprint reader under the phone's display on the upcoming Galaxy Note8, but recent reports suggest that the company is still having issues.

Now, a new report, backed with an alleged drawing of the Note8, claims that the fingerprint reader will go on the back of the device.

The drawing shows the back of the phone and confirms dual camera setup, but it also shows that the fingerprint reader will go right next to the camera on the back.

The drawing was obtained by BGR and is based on schematics that came directly from the factory tasked with building the new phone.

If the report is true, undoubtedly many will be disappointed with the lack of fingerprint scanner embedded under the glass on the front of the phone. Especially considering that the Note8 is expected carry an almost $1,000 price tag...