Mass Effect: Andromeda's combat can be great, but it can also be quite overwhelming, especially when you don't know which skills are good. Having efficient skill synergy is absolutely essential in this game, and we've found an amazing pure biotic build that turns players into Jedi gods.

BioWare's latest Mass Effect game gives access to 24 different skills and abilities, but we can only use three skills at a time. Sure there's the Favorites bar that allows us to switch skill loadouts, but it's clunky and awkward, and your powers can't be used right away--they have to cool down first. So finding the perfect three-skill synergy is crucial. At first I tried to go with a jack-of-all-trades type of build...but it failed pretty badly. I just couldn't find the right skills. Then I tried to play as a full biotic, but that didn't go well either. I was just using the wrong skills. 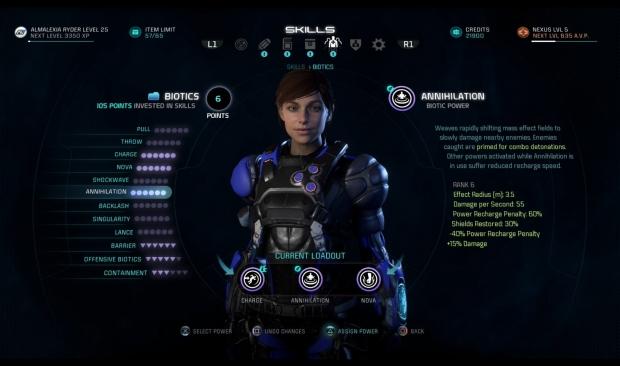 Then I came across this biotic god build on Reddit, and I never looked back. I pretty much never die now, and all the enemies are pushovers--including the massive Architect boss. This build proves you don't need to complicate things with multi-skill synergies. It uses three skills and three skills only: Annihilation, Nova, and Charge. Barrier is used, too, but it's not an active skill per se.

But it's not just about the skills. The passive bonuses make or break any build, and you also need the right kind of weapons and armor to naturally compliment the build itself, including an extremely vital melee weapon.

Note: This is a close-range build so if you're a sniper or a marksman, you might want to try different builds. 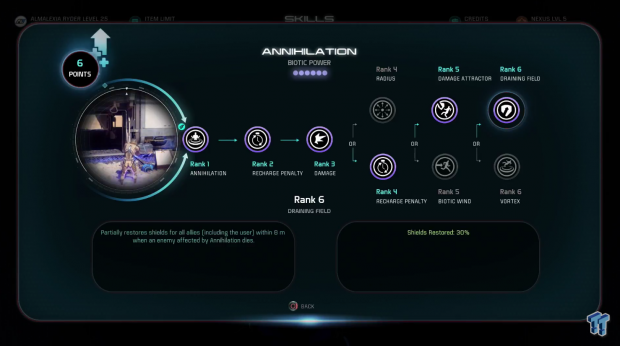 Annihilation is the glue that holds this build together. The skill activates a mass effect aura that follows you around. Enemies that are caught in the aura are not only damaged, but they're primed for combos too. With the right passives the aura can also lower enemy defense and keep you alive--all while dishing out incremental AOE damage.

When you pick the following passives every enemy you kill that's afflicted by Annihilation will refill your shield bar. This is half of the main synergy of the build.

Here are the passives you need to unlock in the Annihilation tree:

Rank 4: Recharge Penalty - This helps mitigates the main drawback of Annihilation, which is lowered recharge rates on all skills. But other passives will pretty much negate this drawback entirely.

Rank 5: Damage Attractor - Enemies afflicted by Annihilation take 20% extra damage from ALL sources. This is like amplify damage from Diablo 2, and is super helpful. Get it!

Rank 6: Draining Field - This passive is CRUCIAL for making the build work. Draining Field is half of build itself and without it, the build just falls apart. Every enemy killed that's affected by Annihilation will regen your shields. You'll see why this is a huge deal soon. 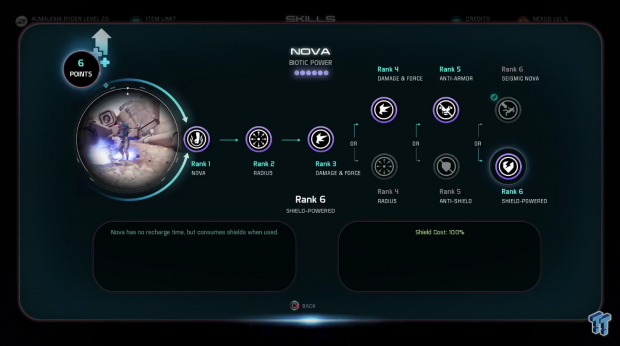 Nova is your main damage-dealing ability in this build. It's a close-range attack that can absolutely annihilate groups of enemies or single foes. Nova will eat through armor and shields surprisingly fast but in our configuration it won't prime or detonate biotic combos.

With this build you'll be spamming Nova all over the place and blasting enemies in a decently-sized radius, sending them flinging all across the galaxy.

Rank 4: Damage and Force - Since Nova is your main damage-dealing skill you want to boost its damage as much as possible.

Rank 5: Anti-Armor - This one can go either way depending on your preference. I picked Anti-Armor because I can easily deal with shields with Disruptor Ammo, and my combos usually eat through shields anyway.

Rank 6: Shield Powered - This is the other half of the build. Shield-Powered is 100% critical to making this build work! Nova no longer has a recharge time and instead uses your shield to cast. That sounds pretty bad on its own, but when we combine it with Annihilation's Draining Field perk, the combo just takes off.

Normally it'd be awful to waste our shields to cast a skill. But the synergies allow the abilities to feed off of one another in an explosive damage-dealing symbiosis. We can cast Nova over and over and then refill our shields every time an enemy dies. Plus there's a particular Barrier passive that will instantly refill shields and health in case you're in a jam. 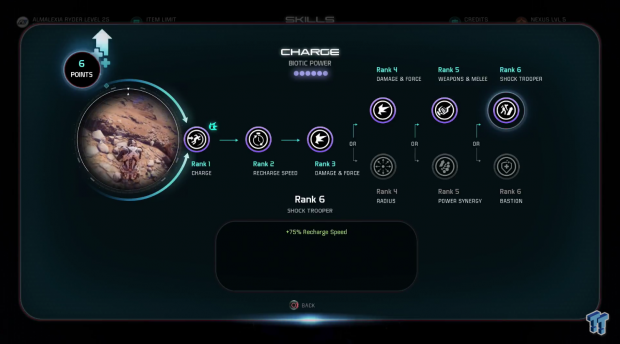 Last but certainly not least we have Charge.

Charge is third in line but it's absolutely essential to the build. Since this setup is based on close combat, we need to close the distance between ourselves and enemies efficiently and quickly. That's where Charge comes in: using this skill you can literally teleport across the map.

Charge would be useful just for the teleportation alone, but it also slams into enemies and deals a decent amount of damage. As a triple bonus Charge will even detonate combos.

Remember that Cryo, Disruptor and Incendiary Ammo can all prime combos, so even though we're a pure adept biotic we can still trigger the entire spectrum of combos. Using Charge in tandem with special ammo is a quick, easy and explosive way to dish out damage.

Here's the tree you should pick for Charge:

Rank 5: Weapons and Melee - That extra melee damage boost is great, especially since we'll be using a particular melee weapon for this build. Pick it!

Rank 6: Shock Trooper - This is a tough one. The Rank 6 Bastion skill is great and really does synergize with our main build, but Shock Trooper is much more important. Since our build is up close and personal style, you need to be able to cast Charge as often as possible to close the distance between you and enemies. The 75% recharge speed is really vital to the skill's availability. 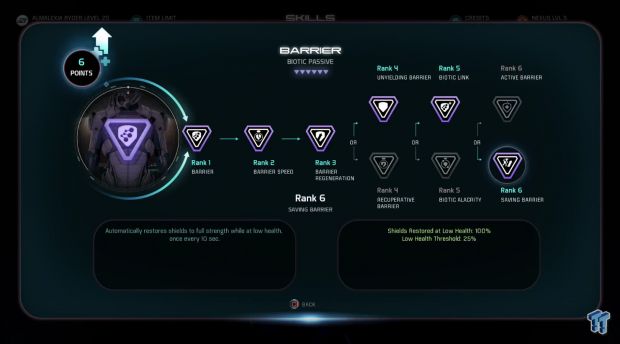 Barrier is your only means of defensive protection for this build, so make sure you flesh out this tree accordingly. Defense is important, especially our shields, which are now our major resource for casting the main damage-dealing ability in our repertoire.

Here's the tree you should pick for Barrier:

Rank 5: Biotic Link - When any biotic ability is afflicting an enemy, we get a 40% boost in our max shields. Since any enemy that comes in contact with us is afflicted by Annihilation, we get that extra boost without even trying. That means even more Nova casting! Hooray!

Rank 6: Saving Barrier - This one is tough. Active Barrier is tremendously awesome and would compliment our build exquisitely. But Saving Barrier is incredibly useful and you should get it instead. Saving Barrier is your life insurance. This build can get dicey at times and you might find yourself without any shields and on the brink of death.

That's where Saving Barrier comes in: it'll instantly recharge your health and shields if you're about to die. It's saved me many times! Grab it. 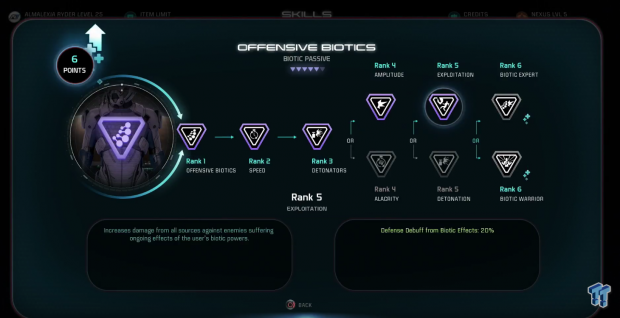 You can customize these as you see fit, but there's one skill you need to get: Offensive Biotics Rank 5: Exploitation. This will reduce the defense of enemies caught in the Annihilation field, further enhancing your ass-kicking skills. 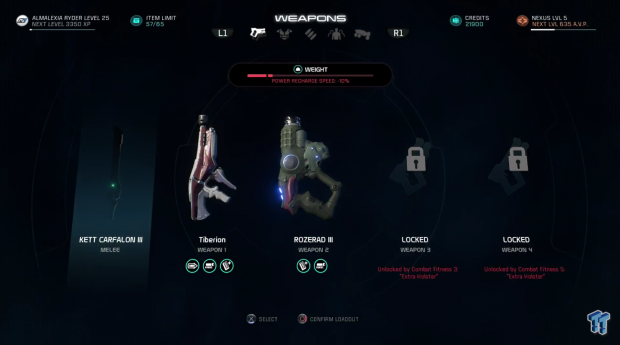 Here's a list of the gear that best compliments the pure biotic adept skills: 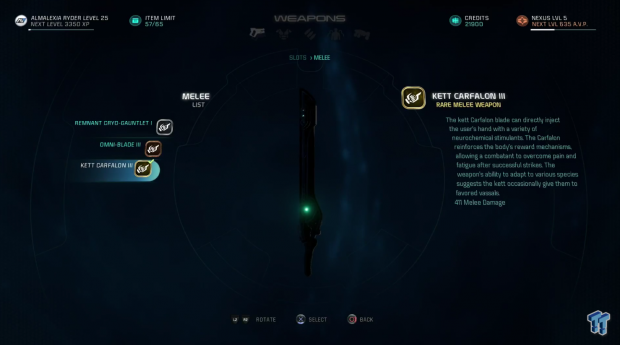 Remember that melee weapon I was talking about? Behold the glory of the Kett Carfalon.

The Kett Carfalon is a sword with life leech. Every time you strike an enemy the sword will regenerate HP, pretty much acting as a secondary form of life insurance. But not only does the Kett Carfalon restore your health, it will restore your shields when killing an enemy as long as Annihilation is active.

So this melee weapon becomes a triple threat: dealing surprisingly potent per-strike damage while restoring HP and shields. Plus it has no ammunition. 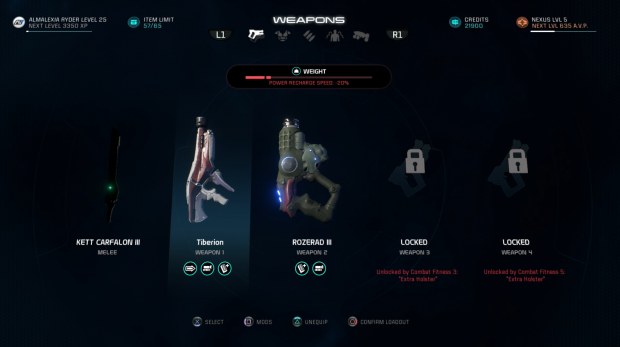 Our build is close-ranged so I recommend going with a shotgun. I personally like shotguns that have at least 4 shots per clip. You can use Research and Development to make some purely insane weapons in this game, so experiment and try to compliment the build with some nifty arms.

A secondary weapon is optional. If you do go with a secondary weapon, make sure its something lightweight like a pistol. Remember the heavier you are the slower your abilities will recharge. With a shotgun and a pistol I have -20% skill recharge and am doing fine. Just don't push it.

I personally like SMG pistols that have huge clips. Having expanded clips means I get more shots of special ammo that I can use to trigger combos. I go into battle with Incendiary and Disruptor Ammo for this express purpose. 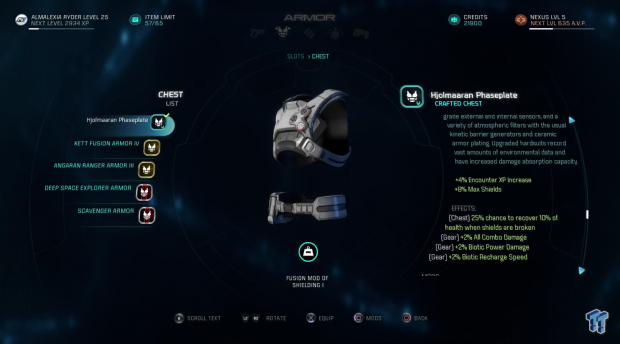 Go for armor pieces that raise your max shield percentages, and add in some augmentations that boost your biotic damage. The extra shields will help bolster your reserve of Nova-cast resources, and depending on what mods and augmentations you have, the armors can get pretty insane. Use Research and Development to craft gear. 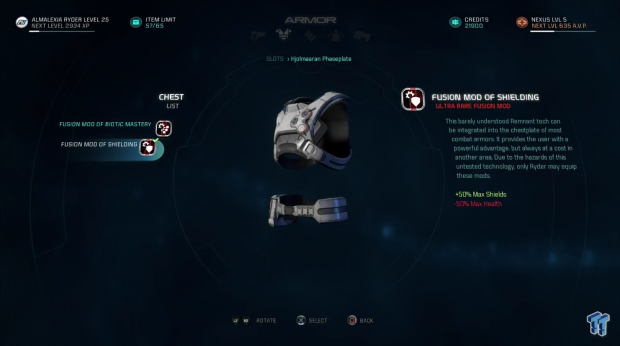 The Fusion Mod of Shielding is amazingly useful for our build. Sure it knocks our HP by 50%, but it also boosts our shields by 50%. I've already hammered how important shields are for this build so you can guess why this mod is absolutely amazing.

I'm not sure what the max shield % boost cap is, but I have a feeling we've hit it with all of our synergies.

If you're not comfortable trading your HP, you can also use the Fusion Mod of Biotic Mastery to add a hefty % boost to all of your biotic attacks. 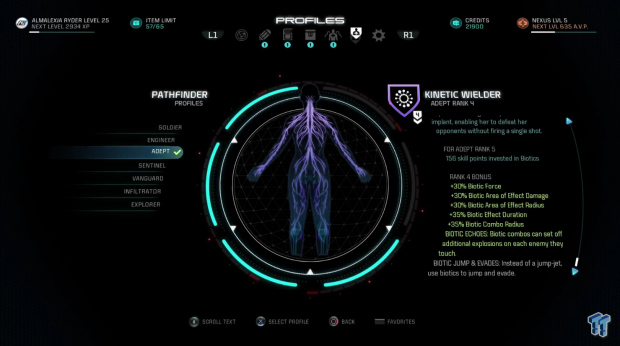 But sure to set your Adept Profile! Unlocking all these biotic abilities gives you access to the Adept profile, which tremendously boosts your skills across the board. You also get access to this awesome Biotic Echoes ability, which expands biotic combos to nearby enemies.

So there you have it! This build is absolutely amazing and I'm actually having a blast in combat now. I hope this build has helped you out, and be sure to let us know what awesome skill synergies and builds you've created in the comment section below.