One thing I've always loved about Dragon Age and Mass Effect games is skill combos. The ability to combine certain skills in a potent concoction of chaos makes me feel like a mad scientist, and nothing is more satisfying than experimenting with different abilities. Mass Effect: Andromeda is carrying the torch forward with a newly evolved combo system that will make us all into crazy skill-brewers.

Prime skills initiate the power combo, and detonators trigger the actual combo. In Dragon Age: Inquisition, combos had "starters" and "detonators," all of which delivered different effects that allowed for a tactical multi-faceted strategem. But Dragon Age has cross-class combos, and since Mass Effect: Andromeda doesn't actually have classes, the game opens up even more opportunities for havoc-inducing combos.

Power combos are triggered when successively casting different abilities and powers from the Tech, Biotics and Combat trees on the same target.

For example, you can cast Cryo Beam (Tech) on a foe, freeze them, and then fire off a Lance (Biotics) to trigger a potent power combo.

Interestingly enough, this combination detonated a Cryo Combo, hinting that the "primer" skill will designate the affects of the combo itself. We don't know exactly what a Cryo Combo does, but I'd wager it slows enemies down while dealing frost/ice damage.

Players can power combo off of their own casted skills or trigger devastating combos with squadmates. Power combos can be further enhanced with passive buffs in skill trees and class profiles. Veteran Mass Effect players will recognize class profiles like Adept, Sentinel, Infiltrator and Soldier.

While there are no actual set classes in the game, these profiles instead add passive boosts and buffs to enhance specific power trees. For example the Adept profile boosts Biotics damage and area of effect. 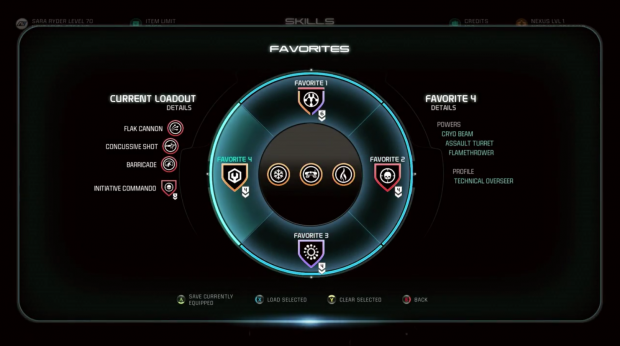 Since you'll have unfettered access to all skills across the Combat, Tech and Biotics trees at once, and can only have three abilities in any single loadout, the favorites bar is a must.

Favorites let you assign specific loadouts and class profiles to quick-swap on-the-fly. This allows you to set up loadouts tuned for specific situations, giving you the tactical advantage: have a loadout with Tactical Cloak for sniping, or a loadout specifically mapped for spell combos with Cora or Drack's skillsets.

"Power combos activate when you or your squadmates primes an enemy or groups of enemies, setting them up for the kill. Then you or a squadmade jumps in to detonate and finish the job.

And you can always level up your squadmates to make them specifically good at priming or detonating targets."

Well that's only true for Scott/Sara Ryder. Your companions are actually set in non-changeable classes and roles, so if you want to prime and detonate combos with your squad, you'll have to do a bit of planning (use the favorites bar!).

Of course you can always combo off of your own powers and abilities but you'll need to keep this in mind when on the battlefield and trying to maximize complete squad synergy.

I can't wait to fire off all the spells Mass Effect: Andromeda has to offer and mix and match like some crazed, Biotics-enhanced mad scientist!

Oh, remember that Mass Effect: Andromeda's combat is so dynamic and layered that you're not restricted to just power combos: you can literally fire off combos using your jetpack in tandem with skills.

Shoot a Cryo Beam at a baddie and then slam into him with your jetpack for explosive results! I'm going to be doing this soooo often in the game.