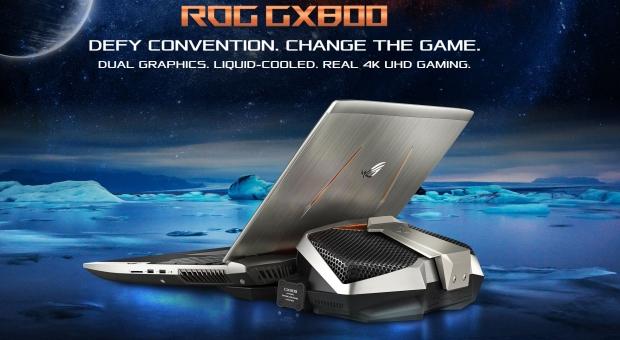 Starting with the new ASUS ROG GX800, we have an 18-inch 4K display with GeForce GTX 1080s in SLI, providing some truly crazy performance. The new ROG GX800 includes the ROG-exclusive Hydro Overclocking System that pushes the CPU, GPU and RAM to their limits for additional performance.

The new ASUS ROG GX800 and its 18-inch 4K display includes NVIDIA's G-Sync technology, the MechTAG (Mechanical Tactile Advanced Gaming) keyboard with mechanical switches and customizable RGB LED backlighting for each key. The new ASUS ROG GX800 requires 2 x 330W power adapters, but when you're getting the performance of GTX 1080 SLI, would you care? It's pretty insane, whatever the scenario is.

The ROG G752VS features the GeForce GTX 1070, the current-gen Intel Core i7 processors based on the Skylake architecture, and up to 64GB of DDR4. The CPU is overclocked, allowing gamers to hit 4GHz if they want to, while the 1080p panel has a high refresh rate of 120Hz for liquid smooth gaming. ASUS also has the ROG G752VM variant which is powered by a GeForce GTX 1060, and can be configured with the same Core i7 processor and up to 64GB of DDR4, too.