IDF 2016 - Intel has just unveiled its new Project Alloy headset, a wireless merged reality headset, that is the company's VR headset design - without the need for any other components. 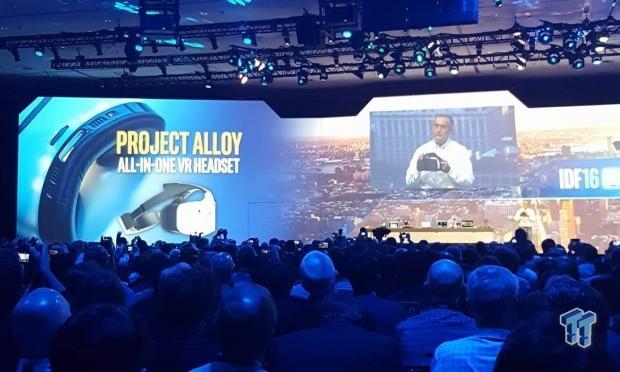 Intel's headset will include everything you need to render the merged reality, with an internal battery for power, 3D cameras and sensors powered by Intel's own RealSense motion tracking technology, and more. Intel CEO Brian Krzanich said that the headset is capable of "merged reality" which blends elements of the real-world, into the virtual one. During the Intel Developer Forum, the company demonstrated someone wearing a Project Alloy headset user who was holding a dollar bill in his physical hand, where he was shaving down a virtual block of gold in the VR world.

Krzanich said: "We believe the capability of Alloy and what it introduces is significant. It gives the opportunity to merge the physical and virtual world together". The company says that a merged reality headset should solve some of the issues about VR blocking out the real-world, where you can't see anything happening around you when the VR headset is on. Intel's new Project Alloy headset doesn't have any of the advanced and precise tracking technology that HTC and Valve designed with Lighthouse for the HTC Vive system, so we're looking towards an improved GearVR, with higher-end technology inside.

Intel has plans to make Project Alloy completely open source next year, as well as its RealSense technology API so that third-party manufactuers can work on their own headsets that are powered by Windows 10 and can use Intel's technology. Krzanich continued explaining: "Anybody can take the Alloy hardware, combine it with Windows Holographic, and build a world-class virtual reality system with any manufacturer they choose".