Quake Champions is sitting right up in the top 5 games I want, and with everything I hear, I want it more. DOOM and Quake Champions game director Marty Stratton has detailed Quake Champions a little more, teasing that it will not be running on the id Tech 6 engine.

Stratton told Finder during an interview: "We had such success with Vulkan and Doom that Robert Duffy, our chief technology officer, was like, "alright guys, this worked out well for us. So we need to do it [with Quake]." But we still have to look at it, because Quake Champions' technology is part id tech, but also part Saber tech. It is not on Id Tech 6 [game engine]. If it was, it would be all good with Vulkan and we would be happy".

Tim Willits, Creative Director on Quake Champions, said that id Software is crafting the game to run fast on a variety of PCs. Willits said: "Because we had such success with pairing Vulkan and Doom, it is definitely something we are looking at, but I can't confirm it at this point. Hopefully you will not have to upgrade your machine too much, but we're all about speed with Quake Champions".

He continued: "We want to run at 120Hz and we want to run fast. If you go and get the new GTX 1080 [graphics card] it sure looks fast. That is what we have been using to test Quake Champions and I've been like, "damn, these cards are fast!" But we do want to have that big base of people [playing], so we cannot make it ridiculously overpowered".

Quake Champions has no limitations and is being built to scale right up to high refresh 120Hz (and beyond) monitors. It's a PC exclusive that will be released in 2017, so prepare your wallets to upgrade your gaming machines, peeps. 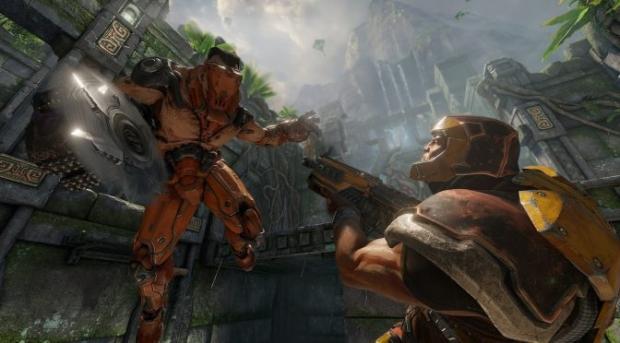