If I had seen the below video as a child, I may have eagerly chosen engineering as my career. Make Magazine has not only uncovered the top secret prototypes hiding in Valve's VR labs, but their interview with engineers Alan Yates and Monty Goodson is downright inspiring. The pair behind a significant majority of the HTC Vive's early research and prototyping make it look genuinely fun. Sure, they're reserved on camera, but you can see little moments where childlike glee still escapes.

Yates and Goodson give the world a rare glimpse into not just the creation of the Vive and Lighthouse tracking system, but also the research that got them to the starting line. Valve solved a lot of crucial problems before modern VR could become a thing, and amazingly, a bunch of the early prototypes were essentially assembled from cheap parts they purchased from Amazon -- even hard drives from the trash bin. Others were 3D printed and hacked together.

You'll want to watch for "The Susan," an early part of Valve's research into discovering how vestibular ocular reflexes work. They carved out the inside of a Lazy Susan, mounted a modified gaming monitor to it, and then placed it over their head with a bunch of wires and sensors. Through this crazy contraption, they learned how your eyes and the vestibular system in your ears (that detects motion) worked together. 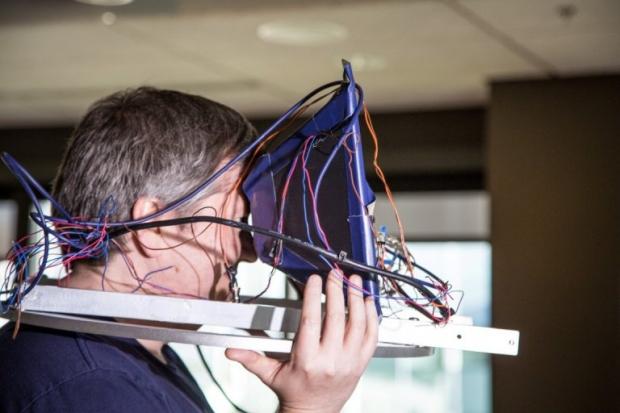 But I want to also call attention to this quote from Monty Goodson, which further emphasizes Valve's open nature.

"We worked with HTC to make this as much of an experimentation platform as it is a consumer product, because we know in these early stages of VR, there's still a lot to figure out and a lot to explore," says Valve engineer Monty Goodson. "We want to encourage that."

It's just an awesome video, and if you're remotely interested in electronics definitely give this a watch.