Ubisoft has detailed the upcoming v1.2 patch for The Division, something that has its own 'Conflict' trailer which you can check out below.

The official v1.2 patch for The Division will have a new Incursion known as Clear Sky, which will have Division agents playing against Rikers. This will have gamers trying to take back a LMB-controlled anti-air site. The new Conflict Incursion isn't the only new thing in the v1.2 patch, as we'll also be introduced to high-value targets, modifications to the Dark Zone, gamers having the ability to hijack loot, new gear sets and more.

Ubisoft explains: "Another new feature coming in the Conflict update is high-value targets (HVT). The HVT officer inside your base of operations will provide you with a list of these targets, along with a description, their level, and the recommended gear score you need to engage them. You'll have a limited amount of time and only one chance to take down these targets. The Dark Zone will see some changes that are going to make extractions even more intense than they were before. Specifically, Agents will now have the option to hijack your loot. This means that a player can run to an extraction rope and cut it, causing all of the loot to fall to the ground". 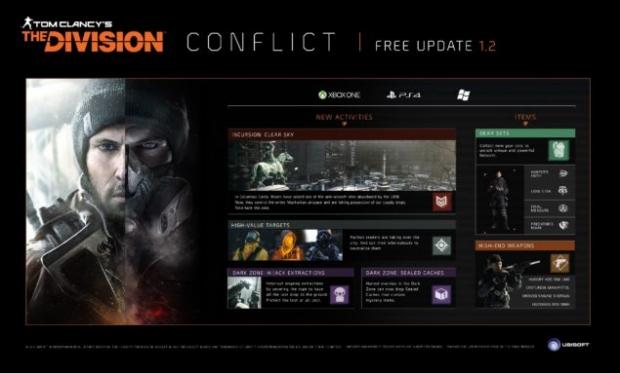