Rocket League was is one of the best surprises to come out of 2015. Its blend of racing and soccer (or football for those elsewhere) has been a treat for casual and competitive play. Psyonix is running a free promotion this weekend that lets anyone interesting in using automobiles to slam a ball into a net can do so. It started Yesterday, April 21st at 10AM PT and will run through Sunday, April 24th 10am PT. 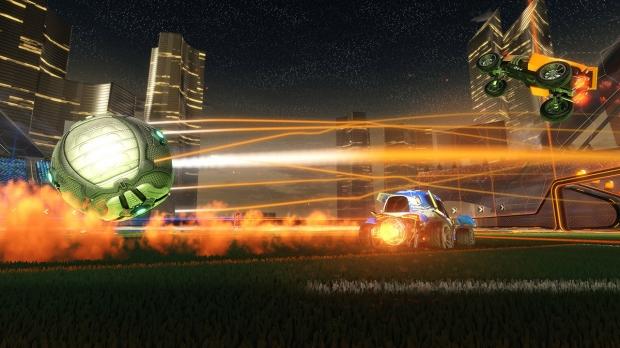 They say that it's completely free to everyone, regardless of whether you've bought it or not. And after the free weekend, they're discounting it by 40% until 10am on the 25th of April. To sweeten the deal they've also discounted all the various bundles and DLC packs by 20% as well, just in case you'd like a specific skin pack or something else.

Psyonix has been very supportive of their hybrid sports game with several optional DLC packs and quite a few updates that have addressed many different issues. Coming soon, the next update will add a basketball-themed motif to it, letting you try your hand and driving a smaller ball into an even smaller net off the ground. Hoops is coming April 26th for free and for everyone. They've even officially partnered with the NBA to offer an NBA flag pack with 30 different flags. Everyone will get one, at least, for free with the update, however.