GDC 2016 - Razer's external GPU enclosure now has a price, with the Razer Core costing $499 on its own, or $399 if it's purchased with compatible Razer gaming notebooks. 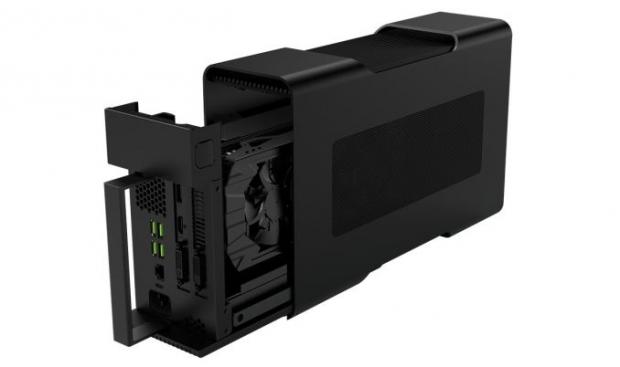 The Razer Core is a unique GPU enclosure, which takes dual-slot, full-length video cards. GPUs that are installed can include the Radeon R9 Fury and GeForce GTX Titan X, as the Razer Core has an internal 500W PSU. The Razer Core also feature 4 x USB 3.0 ports, GbE connectivity, and two-zone lighting.

Core connects to your laptop through Thunderbolt USB-C, which offers up to 40Gbps of bandwidth. Installing a video card inside of the Razer Core is super simple, as it's a tool-less design. Better yet, AMD's impressive XConnect technology is something that's compatible with Core, meaning your laptop can seamlessly switch between onboard graphics, and the GPU inside of the Core.

The Razer Core is compatible with video cards that consume up to 375W of power, and they can't be longer than 12.2 x 5.98 x 1.73 inches. As for the list of compatible video cards: