HP is back in the phone business after their brief encounter with WebOS and the Palm Pre series of sliders. But this time, they're infusing top-end hardware into a Windows 10 phone to make it an all-in-one ecosystem for businesses. 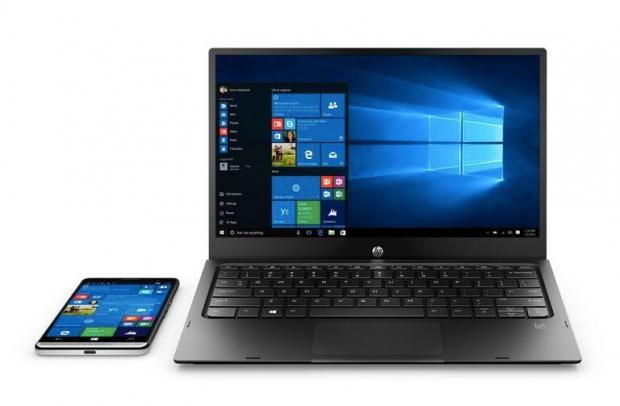 The phone itself is a svelte matte-black brick of a case with a 5.96-inch 1440p display that's been stuffed with the Kyro cored Qualcomm Snapdragon 820 chipset that has four total custom designed 64-bit cores with two operating at a blistering 2.15GHz and two more cores, for the less busy tasks humming along at 1.6GHz. It'll be paired with 4GB of LPDDR4 RAM 64GB of storage, standard. In case that isn't enough storage it can be expanded by 1TB through the microSD card that's on board. Two SIM cards can be populated letting world travelers just keep in their favorite destination's carriers SIM just in case.

But the really interesting bit is the inclusion of a laptop dock, similar to the one that was being marketed with the Motorola Atrix from 2011. This lapdock is a 12.5-inch screen with a full-sized keboard, trackpad and a 48WHr battery attached, letting you use Microsoft's Continuum to display on the larger screen. The phone is being marketed towards businesses, where this one device can theoretically replace both laptop and phone, becoming the only device you might need to be productive. But just how would that work?

The Atrix was a failed experiment, mostly because it was hardly useful with a lack of productivity apps at the time, but also because it was largely seen as being unnecessary. Having separate productivity and communication devices is hardly a burden (and you'd have two physical, separate devices anyway) and even though the specs are mighty enough, it might not be enough for the kind of true multi-tasking PC power-users enjoy.

If anything it'll be an interesting experiment and could even spread into the more consumer-focused flair. The new Snapdragon 820 with it's redesigned Kyro core could surprise us all with it's efficiency and power. The A9X has proven to be an adept multitasker in the iPad Pro, so why couldn't this also provide the same type experience.