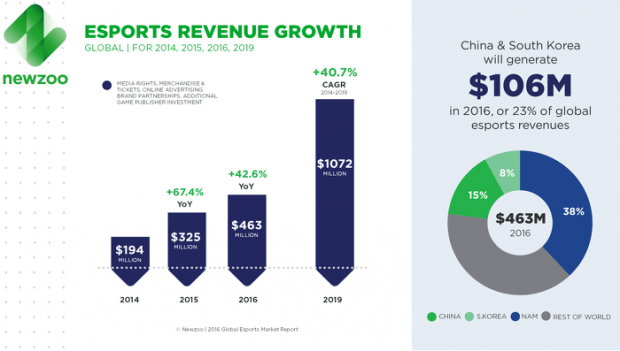 $325 million might sound like a lot, but Newzoo expects the eSports economy to grow 43% to $463 million this year. The research firm attributes the 43% growth to an audience of 131 million, eSports enthusiasts along with another 125 million "occasional viewers who tune in mainly for the big international events". Newzoo said that global and local eSports markets should generate around $1.1 billion in 2019.

Digging deeper into the research, Newzoo said that investment into and advertising around eSports continues to expand rapidly. Newzoo said: "This year has been dominated by the amount of investors getting involved in eSports. An increasing amount of traditional media companies have become aware of the value of the eSports sphere and have launched their first eSports initiatives. With these parties getting involved, there will be an increased focus on content and media rights. All major publishers have increased their investment into the space, realizing that convergence of video, live events and the game itself are providing consumers the cross-screen entertainment they desire from their favorite franchises".

Online advertising is something that is increasing considerably, with it being the fastest growing revenue segment in eSports. Online advertising within the eSports market grew 99.6% on a global scale in 2015 when compared to 2014, with the United States expected to lead the world. Newzoo eSports analyst Pieter van den Heuvel said: "In 2016, North America will strengthen its lead in terms of revenues with an anticipated $175 million generated through merchandise, event tickets, sponsorships, online advertising and media rights. A significant part of these revenues flows back to the game publisher, but across all publishers, more money is invested into the eSports economy than is directly recouped by their eSports activities".

But it's not just the US that's an eSports powerhouse, with van den Heuvel continuing: "China and Korea together will represent 23 percent of global esports revenues, totalling $106 million in 2016. Audience-wise, the situation is different, with Asia contributing 44 percent of global eSports enthusiasts. Growth in this region is, for a large part, fuelled by an explosive uptake in Southeast Asia".

Newzoo CEO Peter Warman finished up by saying: "The initial buzz will settle down and the way forward on several key factors, such as regulations, content rights and involvement of traditional media, will become more clear. The collapse of MLG was a reminder that this market still has a long road to maturity and we need to be realistic about the opportunities it provides. In that respect, it is in nobody's interest that current market estimates differ so strongly. Luckily, when zooming in on the highest market estimates of more than $700 million, the difference is explainable by an in-depth look. This estimate only differs in the revenues generated in Asia (Korea in particular), and by taking betting revenues into account. At Newzoo, we believe betting on eSports should not be mixed into direct eSports revenues as the money does not flow into the eSports economy. Similarly, sports betting is not reported in sports market reports".