Homebrew creations never cease to amaze me. Just this week we saw hackers jailbreak a PS4 to run Linux and play a Pokemon handheld game, opening the doors for current-gen homebrew creations. Now those enterprising console-crackers have found a way to get Windows 95 to successfully run on Nintendo's New 3DS XL handheld, showing the versatility of today's gaming hardware.

The honors go to a modder named Shutterbug2000, who posted up proof of Windows 95 running on the handheld onto the GBA Temp forums. How exactly would you go about getting a 20-year-old Windows operating system to run on a modern video game system? Shutterbug explains:

"Back a while ago, I tried compiling the dosbox from libretro, and using retroarch to emulate dosbox. Yet, every time, it froze on a rainbow glitchy mess. [Then] I tried it on my n3ds, and it just worked," Shutterbug2000 said in a forum response. "So, I think the o3ds just isn't powerful enough to run dosbox, or there's not enough RAM. At it's core, this is just libretro/retroarch dosbox. But I figured, hey, everyone want's Windows on their 3DS, right?"

Although Windows 95 technically boots up on a New 3DS XL, you can't really do much of anything just yet. That will likely change over the coming weeks as curious homebrewers tweak and tinker with the software, making a humorous and entertaining project out of the classic Windows platform. This isn't the first time that a DS has been hacked: Nintendo's 3DS handheld has no stranger to hacks, and is a popular target due to its versatility.

Using programs like Tubehax, gamers have turned the notoriously locked handheld into portable entertainment libraries, with thousands of classic old-school NES and Genesis games as well as movies and TV shows.

Back in August of last year, notorious hacker smealum embedded a 3DS exploit into the official YouTube app, opening up a clever backdoor entrance to access homebrew software. Nintendo has always been one step behind jailbreaks, but the Japanese gaming giant has consistently thwarted these attempts with new firmware updates. 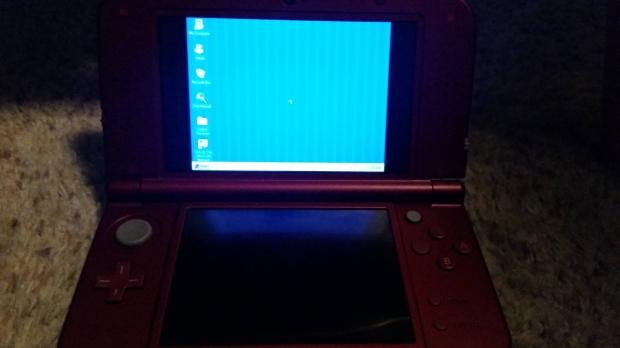