There's no denying that Samsung isn't a big player in the NAND flash game, with a report now confirming exactly how much dominance that this company asserted over the market in recent times. 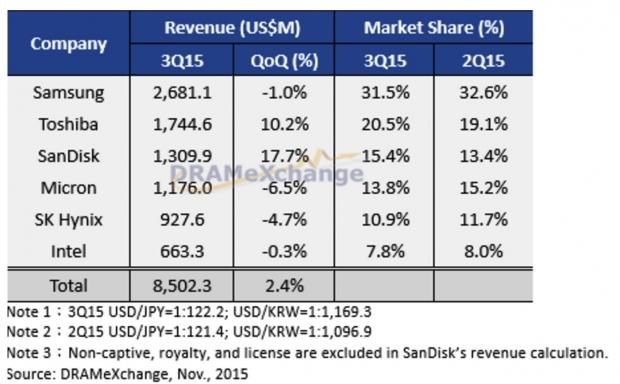 DRAMeXchange and Storage Newsletter reported that not only did NAND flash pricing decline in the third quarter of 2015, but the global flash revenue raised 2.4% as a result. This gain in revenue was seemingly soaked up mainly by Samsung, with this piece further confirming that the technology giant controlled 31.5% of all NAND revenue during this time period.

With second place going to Toshiba at 20.5% and SanDisk lagging behind at 15.4%, it becomes apparent that Samsung are well ahead of its competition. This percentage difference gap is smaller than quarter 2 though, with Samsung posting a 32.6% market share compared to 19.1% for Toshiba and 13.4% for SanDisk. It's also interesting to note that Micron has recently slipped out of third place from Q2 - Q3, dropping a 1.4% share.