It looks like USB Type-C just took a step in the right direction, with the reversible USB port being upgraded to include the Thunderbolt 3 transfer protocol from Intel. 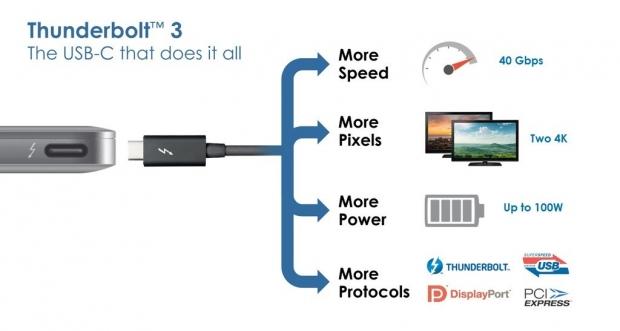 The latest USB Type-C based devices can be found in the new Dell XPS 12, XPS 13 and XPS 15 systems that were announced in October being the first to feature the new port. Intel has called Thunderbolt 3 "port nirvana" thanks to it being capable of transferring data at 40Gbps, twice as fast as Thunderbolt 2, and four times as fast as USB 3.1 which has a ceiling of 10Gbps.

Thunderbolt 3 is quick enough to transfer a 4K video in less than 30 seconds while the port itself can drive two 4K displays at 60Hz, and it can quick charge notebooks at up to 100W. Getting Thunderbolt 3 into the USB Type-C protocol is a big win for Intel, as Thunderbolt connectivity has never reached the high hopes of Intel, but direct integration with USB Type-C is something exciting for Thunderbolt and especially Intel.