Following the launch of its take on the GTX 950, GIGABYTE is adding five more high-end video cards to its Xtreme Gaming lineup. 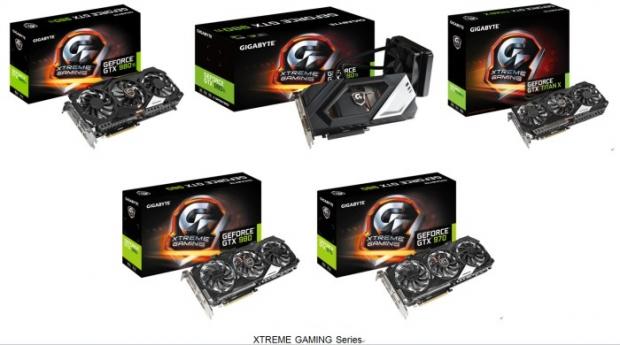 The GTX 980 Ti comes in two flavours: Windforce Edition (GV-N98TXTREME-6GD) and Waterforce Edition (GV-N98TXTREME W-6GD). The Windforce Edition features the normal air cooling system; Waterforce features an all-in-one closed-loop water cooling system that houses FEP tubes, a 120mm silent fan, and a low-noise pump. GIGABYTE claims full coverage (GPU, VRAM, and MOSFET) and 38.8% better cooling over the reference design -- plenty enough that no additional fans are needed. Both include LN2 BIOS and an extra 6-pin PCI-E power connector for overclockers. As for specs, you get 1216MHz/1317MHz clock speeds, a 7.2Gbps memory clock, 6GB VRAM, and a 384-bit memory bus with both.

All cards are said to feature GPU Gauntlet Sorting technology for overclocking proficiency while power switching, an "aerospace-grade" metal back plate with breathable coating for shielding against external forces, a power LED, RGB LED backlighting, extra power phases over the reference design for better power efficiency and stability (10+2 for the 980 and 970, 12+2 for the 980 Ti, and 6+2 for the Titan X), and top-grade chokes and capacitors.

As well, all of the air cooled video cards employ the Windforce 3X triple-fan system, which houses composite copper heat-pipes, a "special" fin architecture, a unique blade fan design, GIGABYTE 'Triangle Cool' technology, and 3D-Active fan (for silence when not doing heavy gaming). However, only the Titan X and the 980 Ti Windforce see the middle fan spin in the reverse direction of the other two fans. GIGABYTE claims this makes for heat dissipation capacity of up to 700W, and better performance at lower temperatures.

Pricing and availability are not yet known.