Reports indicate that LG has laid preparations for mass-production of its own foldable display tech that will lead to flexible smartphone screens, curved screen strips in autos, foldable tablet screens and rollable HDTV screens by 2017.s. 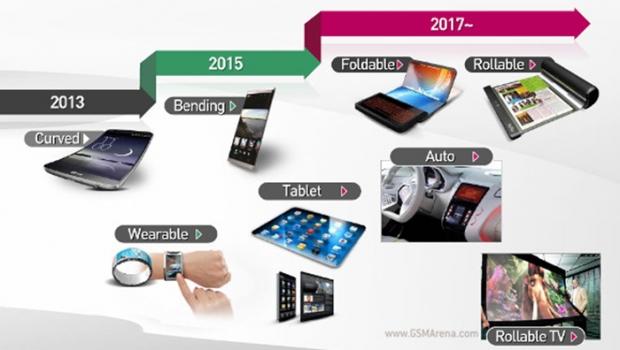 Right now curved displays are seen with wearables like Samsung's Gear S smartwatch and Gear Fit smartbands, but LG is about to take the tech to a whole new level with displays that can be "folded and unfolded more than 100,000 times".

ET News reveals that LG has secured a contract from an unnamed global software company in an effort to "challenge Samsung Electronics' and Apple's strongholds in high-end smartphone market with foldable smartphones". LG has already begun investing huge capital into OLED development facilities in Gumi, Kyeongbuk, and initial shipments are expected to arrive in January 2016. Right now the tech is still in its early stages as functional prototypes.

The display market is set to see exponential growth with the arrival of foldable screens, with industry titans like Samsung and Apple moving to adopt the tech. Market analyst firm IHS predicts that foldable smartphone displays will see a huge adoption rate of 24.4% by 2016 alone, and will account for more than half of the flexible displays by 2020.