Sony has unveiled three new smartphones at IFA 2015, with the Xperia Z5 and Xperia Z5 Compact not standing out too much, but the new Xperia Z5 Premium is the world's first 4K smartphone. 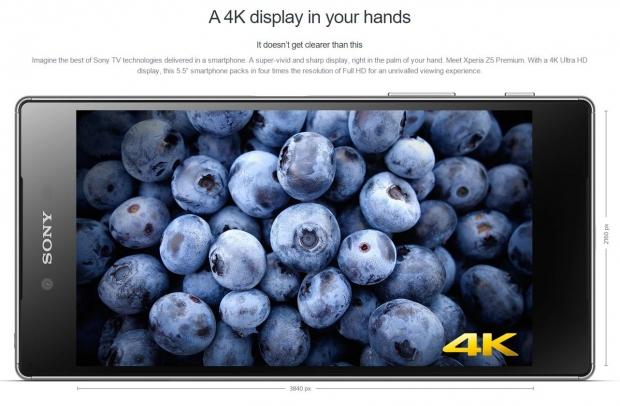 Starting with the Xperia Z5, which features Sony's new 1/2.3 Exmor RS sensor crammed into a huge 23-megapixel camera with an F2.0 G Lens. This is Sony's "first completely re-imagined smartphone camera module since Xperia Z1" and has been "designed with Sony's interchangeable lens camera Alpha technology for clear, vivid imagery every time".

The new Xperia Z5 and Xperia Z5 Compact are both powered by the Qualcomm Snapdragon 810 processor, which is an 8-core GPU with 4G LTE speeds and the latest in Wi-Fi technology. Both handsets pack Sony's incredible battery stamina and power-saving technologies, as well as Quick Charge 2.0 which will have your Xperia Z5 charged up in no time.

But as we said, it's the Xperia Z5 Premium that takes the cake. What we have here is a beautiful 5.5-inch 4K TRILUMINOS Display for mobile, with the Xperia Z5 Premium upscaling your content to 4K making everything you playback on Sony's premium smartphone look beautiful. The Xperia Z5 Premium packs 32GB of internal storage, but you can cram in a huge 200GB microSD card which is where it really takes a leap ahead of the current smartphones on the market - I'm looking at you, Samsung.

Sony will begin selling the new Xperia Z5 and Xperia Z5 Compact in October while the 4K-capable Xperia Z5 Premium will be available in November.