Intel took everyone by surprise when they launched the Broadwell 5775C and 5675C desktop SKUs around Computex. The CPUs not only took the crown with the fastest desktop integrated graphics, but they also were able to overclock. 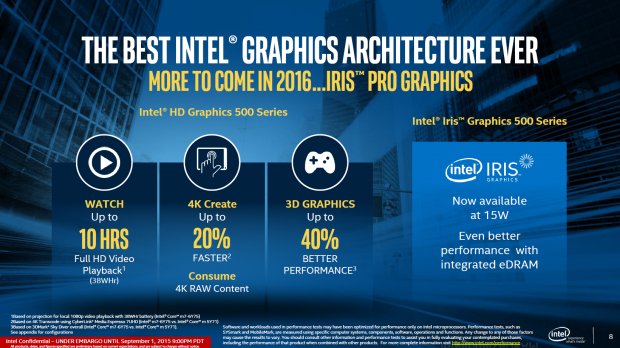 Building upon the success of their Iris Pro line with integrated eDRAM, Intel is adding eDRAM to their more affordable Iris lineup as well. For Skylake, both GT3 and GT4 integrated graphics will feature 22nm eDRAM. The eDRAM will be treated as normal system memory (instead of cache), but should prove to be beneficial for graphics performance.

While the 5775C and 5675C were both launched months ago, only recently did they start to sell. Their prices are also sky high, but we hear that there is demand for desktop CPUs with strong integrated graphics. The overclocking potential of the "C" SKUs was also low, the CPUs didn't overclock well. Intel told us that this was due to the mobile nature of Broadwell; transforming the BGA CPU to an LGA CPU proved to be cumbersome because of the eDRAM implementation and expected overclocking capabilities.

During the question and answer segment of a press briefing at IDF2015 in San Francisco Intel said it has no plans to provide Iris or Iris Pro graphics with an unlocked CPU, meaning that the 5775C and 5675C are novelty CPUs. There might be plans for the next generation after Skylake, but as of now we can only confirm that we won't be seeing any desktop "C" SKUs anytime soon.