It looks like the folks at Utah Valley University have a good sense of humor, after installing walking, running and texting lanese in its Student Life & Wellness Center. The stairway was the brain child of the Marketing & Communications Department, tasked with "enhancing the center's design through the use of art and graphics." 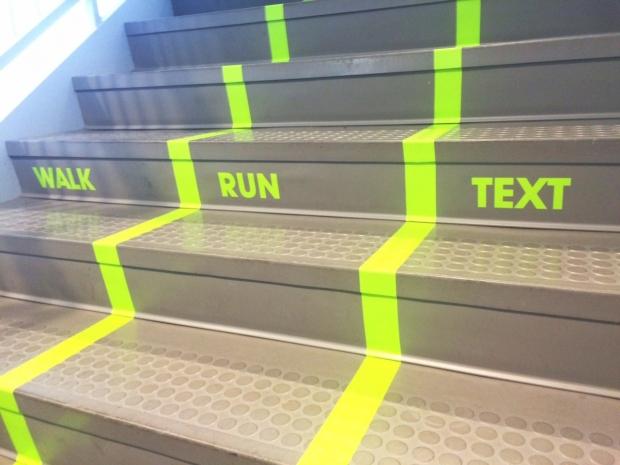 Not surprisingly, the new stairway has received a significant amount of national and international attention - especially with most of us having a story related to watching a person, fully engrossed with using a smartphone, do something potentially reckless or dangerous.

"When you have 18- to 24-year-olds walking on campus glued to their smartphones, you're almost bound to run into someone somewhere; it's the nature of the world we live in," said Matt Bambrough, creative director at UVU. "But that isn't the reason we did it - we used that fact to engage our students, to catch their attention and to let them know we are aware of who they are and where they're coming from. The design was meant for people to laugh at rather than a real attempt to direct traffic flow."

The National Safety Council reported at least 11,000 injuries from 2000 to 2011 related to distracted walking, and it'd be hard to imagine that figure hasn't increased in recent years.