VESA has just announced the latest version of its Embedded DisplayPort (eDP) 1.4a specification, which is the successor to version 1.4 which was introduced close to two years ago now. The new 1.4a revision is capable of an insane 8K resolution in laptops, which is 7680x4320. 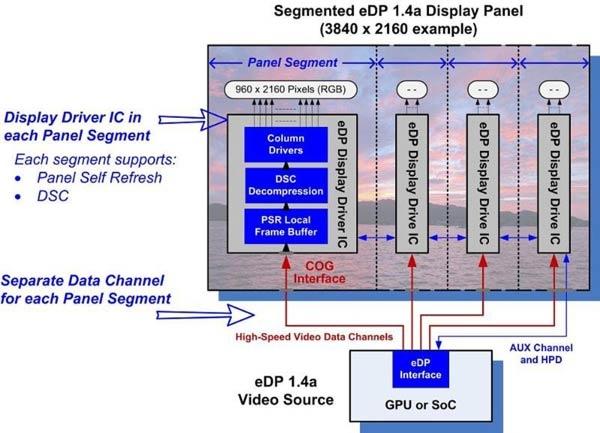 The new eDP 1.4a standard features a new Display Stream Compression (DSC) standard (1.1), and enhanced segmented panel display architecture. On top of that, some other magic is sprinkled inside of the new display standard, which will allow OEMs to create Ultra HD panels for embedded applications, with support for up to 7680x4320, or 8K*4K. eDP 1.4a is capable of 8.1GB/sec per late, where the GPU-to-display interface is split in two, or even four screen segments. This provides a maximum link bandwidth of up to 32.4GB/sec, which will allow for 8K at 60Hz or 4K at 120Hz with 10-bit color.

Now, I'm sure you're why... why mobile/laptops? Well, VR. That's why. We're being teased the future of mobile and laptop displays, with a huge 8K at 60Hz or 4K at 120Hz, which is exactly where VR needs to go. Oculus VR is probably rubbing their hands with glee, so we're going to reach out to them now and see if they have anything to say about this news.