Troubling news is coming to light. Under a cloak of secrecy over 50 U.S. law enforcement have deployed radars that allow them to see through walls. These agencies include the FBI and the U.S. Marshals Service, and the project began over two years ago. These radars run afoul of a Supreme Court ruling that bans the use of high-tech sensors probing the inside of someone's home without a warrant, which helps to explain the total silence on the new radars. 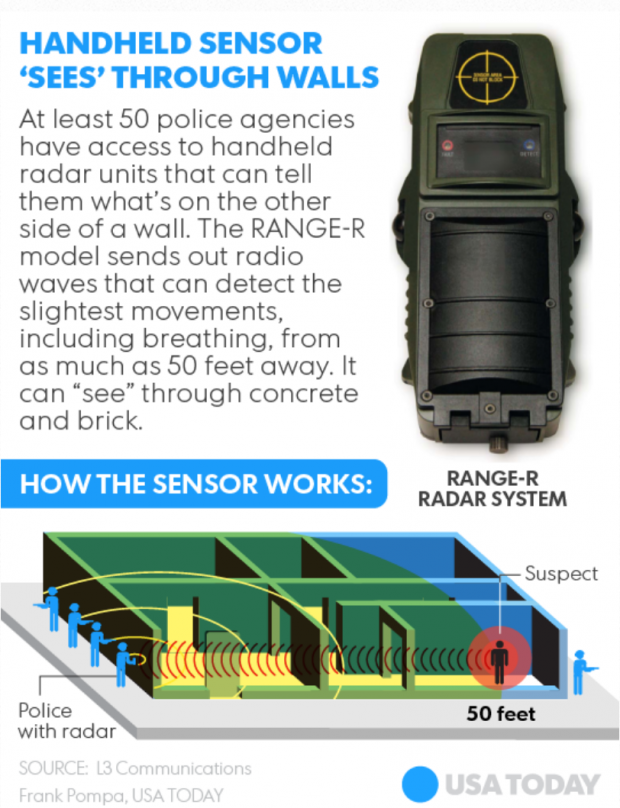 The sensors are effective out to 50 feet and can detect human movement via radio waves. They are so sensitive they can even pick up human breathing. The new technology came to light during a December federal appeals trial of a parole absconder in Denver. During the trial officials revealed they used the device to locate the man, and the presiding judges sounded off that "the government's warrantless use of such a powerful tool to search inside homes poses grave Fourth Amendment questions."

The devices are manufactured by L-3 Communications under the Range-R product family. Each device costs $6,000 and over 200 devices have been sold to US law enforcement agencies. The radar displays if there is movement on the other side of the wall, and displays how far away the movement is. The Range-R doesn't actually show the inside of the building, but there are other models that do. There are similar radar devices that feature 3-D displays of the location of people in a building, and the Justice Department is already funding development systems that can map entire buildings and locate people, so they surely have no qualms with deploying these devices.

A major cause for concern is the fact that the courts, and the public, have not been notified of this new technology. Considering the devices we are just learning about have already been in the hands of the police since 2012, it wouldn't be entirely surprising to find that advanced models are already in use. These devices formed from combat operations in Afghanistan and Iraq, and the emerging news will likely only fan the flames of protest over police militarization in the U.S.. The Supreme Court has already ruled that thermal imaging, and even drug dogs, cannot be used on a residence without a warrant, so there is little doub these devices will also fall under the same category. The U.S. Marshals Service is skirting the issue by insisting they have probable cause whenever they execute an arrest warrant, but it will certainly be interesting to see if that holds water with the court system.