GIGABYTE and EVGA have been on the market with external VRM solutions for serious GPU overclocking, but it looks like ASUS is stepping into the game with its own external voltage regulator module, or VRM. 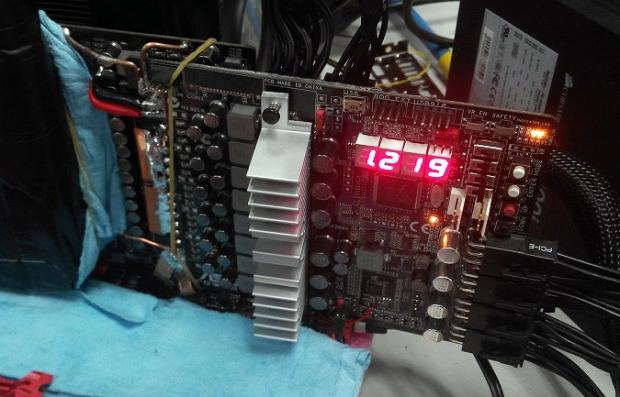 ASUS has already deployed GPUs with advanced 10-phase and 14-phase VRMs in the form of the ASUS Strix GeForce GTX 980 and the ASUS ROG Matrix Platinum GTX 980, but this is an entire new ballgame. The ASUS GPUs with the advanced VRMs still have limitations as they're consumer GPUs, with certain restrictions that stop too much power flowing through the card. The external VRM card will allow for far higher voltages being pushed through the GPU and memory, which should unlock some massive potential for extreme overclockers.

The VRM card in question features a "single 8-phase output with output voltage of up to 2.5V (with output voltage offset switches [+0.4V, +0.3V, +0.2V, +0.1V]) and current up to 500A. The card has on-board voltage control/monitoring, output current monitoring, VRM temperature monitoring, load-line calibration (0%, 60%, 80%, 100%), hotwire setting/monitoring and other features required by extreme overclockers. The board sports four six-pin PCIe (4*75W) input power connectors, which means that it can deliver up to 300W of power to the graphics board, enough power to break world's records" reports Anton Shilov from KitGuru.

We should expect ASUS to unveil this soon, or they could wait until Computex 2015 in June to show off this extreme overclocking VRM beast.