Crossbar has recently made some encouraging gains in the path to commercializing 3D RRAM by 2016. 3D Resistive RAM (RRAM) promises to break the barriers associated with the reduced endurance of NAND as the lithography shrinks. While the best-in-class SLC NAND can pull off 100,000 write-erase cycles, 3D RRAM can deliver an exponential gain to a mind-boggling 100 million write cycles. 3D RRAM is also denser, up to 10X per chip compared to NAND, and provides speeds up to 20 times that of flash. As an added bonus, it draws less power. Seems to be too good to be true, right? Basically unlimited endurance, faster performance, lower power consumption, and it's all wrapped up in one amazingly dense 1TB chip the size of a postage stamp? Providing a product with the performance of RAM, but the persistence of NAND, is the Holy Grail. But is it feasible? 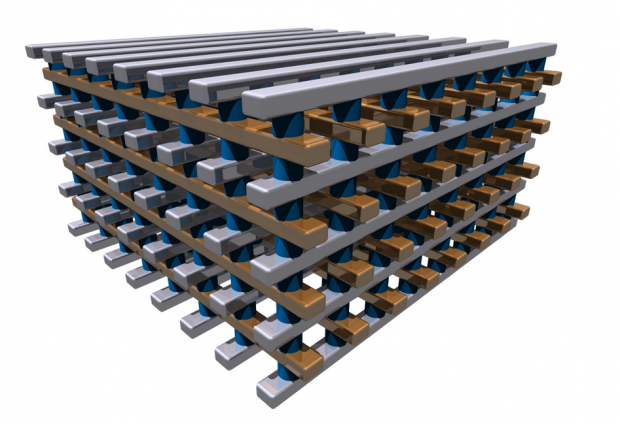 Crossbar believes they are on the cusp of delivering this almost too good to be true product. Crossbar outlined some of the latest advancements at the 2014 International Electron Devices Meeting. Crossbar has patented their Field Assisted Superlinear Threshold Selector, which overcomes the limitations of a sneak path current issue. Sneak path current disrupts the reading of data from RRAM's cells. By eliminating the problem Crossbar has made a huge breakthrough that will see wearable products entering the market in 2016, at least by their estimates, and SSDs roughly 18 months after. We would assume they mean late 2016.

Bringing a new memory technology to market is fraught with obstacles. Reliability comes first, but then there has to be a method of producing the product with decent yields on a cost-effective basis. Even the most promising of storage products isn't going to be successful if it cannot be productized at a reasonable cost. SSDs still fall to the venerable HDD in terms of cost-per-GB, even as prices continue to decline. Competing with NAND is going to be tough as RRAM comes out of the gate. NAND is a proven, mature, and refined technology that can deliver cost-competitive products. One positive aspect is that RRAM is completely compatible with standard manufacturing techniques employed in NAND fabrication, which should speed manufacturing and reduce initial product investments.