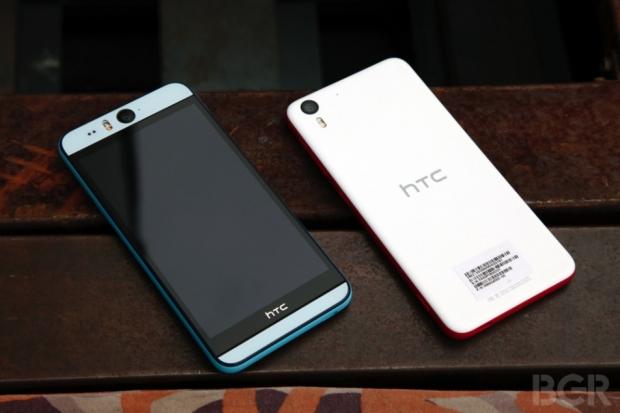 The new Desire Eye features a 5.2-inch Full HD display, 2.3GHz quad-core Snapdragon 801 processor, 2GB of RAM. 16GB of flash storage expandable by microSD, and then of course, the dual 13-megapixel cameras. Both of the 13-megapixel cameras feature wide-angle lenses, and dual-LED flashes. Stereo BoomSound speakers are found on the Desire Eye, three microphones, a 2,400mAh battery, and Android 4.4.4 KitKat.

HTC wasn't scared of the fact that the new Desire Eye is made from plastic, but it's not cheap according to BGR who attended the Double Exposure event. The site reports that "the Desire Eye has a smooth and sleek design that is surprisingly impressive. There are no seams despite the band of color that surrounds the perimeter of the handset, and it feels good in the hand despite its large size". One of the stand out features on the Desire Eye is the new camera software, which comes with six main add-ons which make the selfie-taking experience, well, better.