When Apple announced the iPhone 6, we had confirmation that Apple's next generation iPhone would be powered by the company's A8 processor. We heard it was a 20nm design, one of the first on the market at this process, and that we should expect a decent bump in performance over the iPhone 5S' A7 processor. 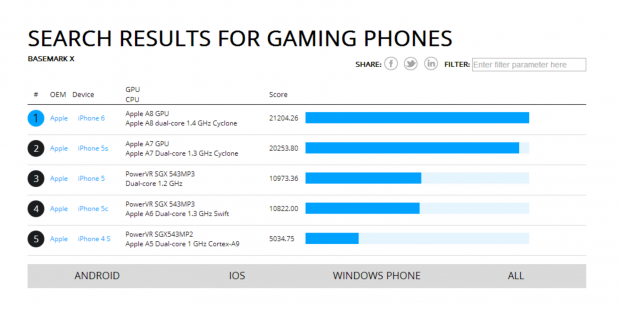 At the time we didn't know what clock speed the A8 would be clocked at, but we knew it be another dual-core processor, the same amount of cores found in the A7. Apple's A7 chip runs at 1.3GHz, so most expected the A8 to be clocked much higher - maybe 1.5-1.6GHz - to provide the jump in performance, but now we know: the A8 processor in the iPhone 6 runs at 1.4GHz, just 100MHz more than the A7 chip in the iPhone 5S.

The news is coming from Rightware's benchmark database, with Basemark X being run on a slew of devices. Apple's A7-powered iPhone 5S scores 20253.80 while the A8-powered iPhone 6 scores 21204.26 - barely any difference. We will have more benchmarks on Apple's latest smartphone when ours arrives next week, so keep your eyes peeled on TweakTown.