For the first time since E3 2013, Remedy Entertainment has shown off gameplay footage of its upcoming Xbox One exclusive, Quantum Break. If you haven't heard about Quantum Break, it's Remedy's time manipulation game, a game that comes off of its success with Alan Wake.

Sam Lake, Remedy Entertaiment's Creative Director, and the constipated face of Max Payne, walked up on the stage of Microsoft's Gamescom press conference to show off Quantum Break. Quantum Break sees Jack Joyce as the main character, who has some unique abilities. Joyce can control time for a limited period, where he can freeze enemies in ice-like time crystals, and then dive from cover to cover.

Quantum Break's world is in peril, as the end of time is happening, with the stutters in the game representing the world itself. These stutters are the outcome of time itself breaking, with bodies, debris, and fire frozen in its tracks. One of these stutters sees Joyce climbing onto a highway, where he sees a frozen semi truck, with its front hanging off of the egde of the highway. Joyce can walk through these stutters, as if they are Matrix-like museums, with people, objects and everything in between frozen in time. 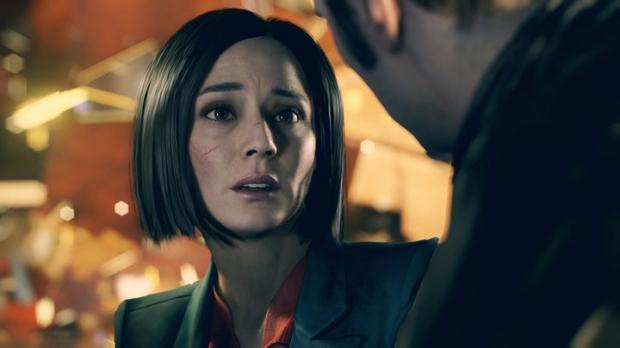 Monarch Corporation, the enemy in Quantum Break, has technology that also allows them to take advantage of these stutters in time. This means that agents that work for Monarch will meet Joyce within these stutters, where battles will take place - a different environment than what most games have on offer these days. Speaking of gameplay, Quantum Break will be offering gameplay similar to what it offered with Alan Wake, which required gamers to shine a light on enemies before shooting or attacking them.

Quantum Break is a little different, as you will use the time bubbles to attack, freezing enemies so that they can be shot. There will also be live-action TV episodes that will be part of Quantum Break, which we should hear more about before the game is released next year.