The X99 chipset tease continues, with GIGABYTE now offering its X99 Gaming G1 Wi-Fi motherboard up to gander at. GIGABYTE has used a truly gorgeous black-and-red theme on its X99-powered motherboard. There's also some hints of white, grey and green across the board. 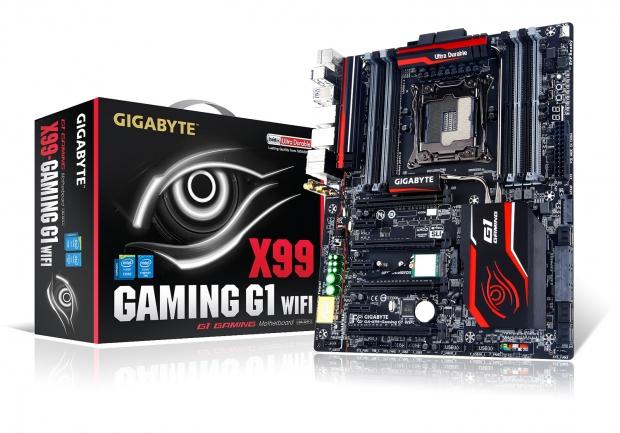 The company is using a full 4-way PCIe layout, with 8 DIMM slots, 10 SATA 6Gbps ports, two of the SATA feature SATA Express capabilities, which goes hand-in-hand with the M.2 slot smack bang in the middle of hte PCIe slots. There's also a mini-PCIe slot which looks like it contains the Wi-Fi module, with an antenna that is connected through the rear panel near the audio ports.

At the bottom of the motherboard, it looks like there are two USB 3.0 headers, two USB 2.0 headers and a Thunderbolt header. The X99 Gaming G1 Wi-Fi also looks like it has a Sound Core 3D audio chip with filter caps, PCB separation, an EMI shield on the codec, an audio gain switch and switchable op-amp. Up in the top right, we have multiple buttons and switches for the usual dual BIOS/selectable BIOS functionality, and much more. We should expect the GIGABYTE G1 Gaming Wi-Fi motherboard to be higher up on the X99 food chain for GIGABYTE, with more boards to be unveiled in the coming weeks.