Ubisoft accidentally posted the name of its upcoming Far Cry 4 which also outlined more details about the game's storyline. The protagonist of the game 'Ajay Ghale' will be travelling to Kyrat to fulfil his mother's dying wish but getting caught up in a civil war to overthrow the oppressive regime of dictator Pagan Min. 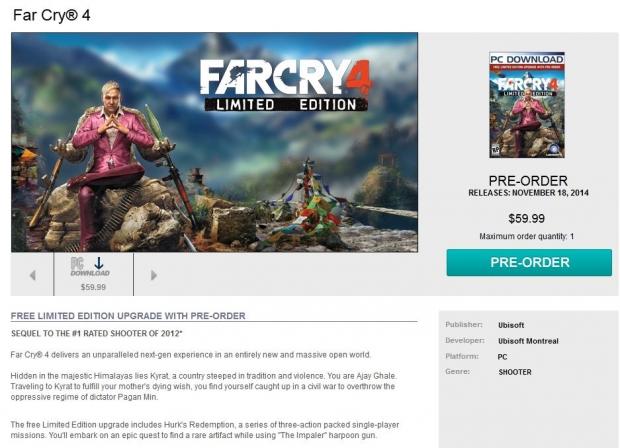 Currently, Ubisoft has altered the description of the game in its Ubi story, but Redditors were quick enough to spot it. The first name 'Ajay' is one of the most common Indian names, whereas Ghale is from Nepal. However, its most likely that the lead is from the fictional country 'Kyrat'.

Alex Hutchinson, Ubisoft Montreal's creative director, said via Twitter,"Just so it's clear for those jumping to conclusions: He's not white and that's not the player.". Hutchinson responded to another article claiming that the promo art depicts 'a blonde light-skinned man in a shiny pink suit against the backdrop of the Himalayas, smirking as he uses a defaced statue as a throne'.

According to what's posted in Reddit, the description of the game (now removed) was as follows:

Hidden in the majestic Himalayas lies Kyrat, a country steeped in tradition and violence. You are Ajay Ghale. Traveling to Kyrat to fulfill your mother's dying wish, you find yourself caught up in a civil war to overthrow the oppressive regime of dictator Pagan Min.

Explore and navigate this vast open world, where danger and unpredictability lurk around every corner. Here, every decision counts, and every second is a story. Welcome to Kyrat.

More details are expected during Ubisoft's E3 2014 stage presentation. The game will be released in November 18, 2014.