The Pentagon has been building itself some robots, with a new Terminator-like rescue robot that would be deployed into disaster situations, where it would search for survivors. 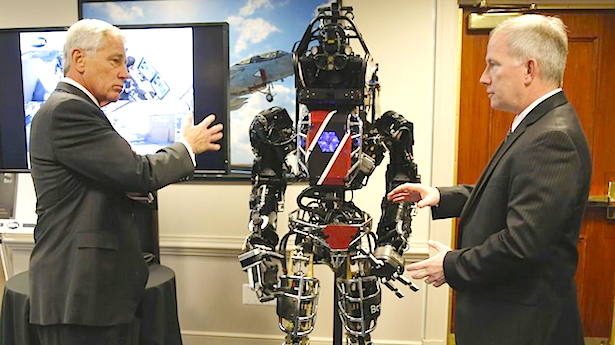 The 6-foot 2-inch robot named Atlas is one of the entrants in a contest that is designed to build a robotic hero, thanks to the Defense Advanced Research Projects Agency (DARPA). The competition sees entrants' robots capable of finding their way through rough terrain and entering buildings. The competition was created after the magnitude-9 earthquake in Japan which crippled the Fukushima nuclear plant and sent a tsunami into the country.

DARPA is The Pentagon's go-to research department, which has just shown off its Atlas robot - featuring LED lighting, but was switched off and simply in a "static" display for the competition. Head of DARPA's Tactical Technology Office, Brad Tousley, told US Defense Secretary Chuck Hagel that Hollywood has portrayed an unrealistic expectation in peoples' minds about what robots are capable of - at least at this point in time.

He said that creating robots that are capable of climbing ladders, opening doors and carrying objects is something that requires massive feats of engineering and computer science. But with this Atlas a here-and-now robot, what is DARPA working on that we will see in 5-10 years? Well, DARPA managers showed Hagel other technologies, but reporters were ushered out after the first three demonstrations, as they were concerned of revealing militairy secrets.

One US defense official spoke anonymously, saying that Hagel was given an update on "PLAN X," which is a cyber warfare project. PLAN X is reportedly a system that links tactical air controllers using tablets and a new long-range anti-ship missile that would be less dependent on global navigation systems.