Today GIGABYTE announced the launch of two new AMD Graphics Core Next (GCN) based video cards. The new GIGABYTE GV-R928WF3OC-3GD and GV-R7265WF2OC-2GD are based on AMD's Radeon R9 280 and R7 265 video cards and feature several upgrades that take them above and beyond AMD's reference designs. 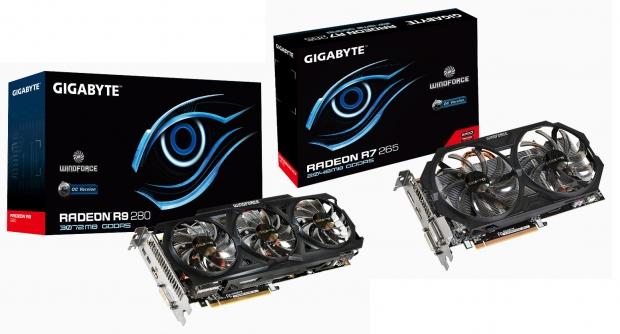 The GV-R928WF3OC-3GD features 1792 GCN stream processor and 3GB of high-speed GDDR5 memory that runs on a 384-bit memory interface. Cooling is handled by a WINDFORCE 3X cooling system that ensures gamers get every ounce of performance out of this factory overclocked GPU. The GV-R7265WF2OC-2GD boast 1024 GCN stream processor, 2GB of GDDR5 memory and 256-bit memory interface. Cooling is again handled by GIGABYTE's WINDFORCE cooler, but features only 2 fans instead of the three seen on the R9 280 OC.

"The GV-R928WF3OC-3GD masters the balance of overclocking ability and video card stability to provide gamers with a reliable gaming environment. It is equipped with exclusive WINDFORCE 3X plus patented "Triangle Cool" technology," said GIGABYTE. "The powerful airflow and heat dissipation capability keeps the video card cool and quiet, and of course leads to the best performance. Even more, both GV-R928WF3OC-3GD and GV-R7265WF2OC-2GD are well overclocked. These two models are packed with groundbreaking features like DirectX 11.2, AMD PowerTune and CrossFire technology. Gamers should never settle for anything less."