Anyone who has ever played any of the games in the Legend of Zelda franchise has dreamed of wielding the legendary Master Sword to combat the forces of evil. A new police report out of Harris County, Texas, shows that one man did in fact wield the Master Sword and actually used it to stab the estranged husband of his current girlfriend. 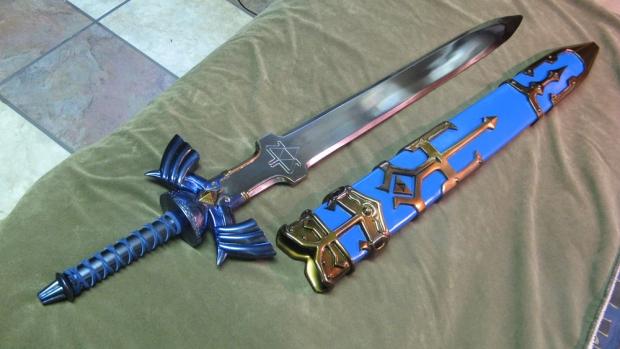 According to deputies, a man named Eugene Thompson was at his home with his girlfriend when the woman's estranged husband arrived at the home around 10PM on Saturday night. When the husband entered the home, he began to chase Thompson around the house, at which point Thompson grabbed his replica of the famed Master Sword to protect himself. During the altercation, deputies say that the husband ran into the sword causing it to enter his body.

The excitement does not stop there though. The wounded husband was then thrown out of the house only to return by physically breaking the door back down and reentering the house. At this point, the two men fought over the sword and the husband was stabbed yet again in the chest and leg. Out of a scene from a movie or cartoon, the harshly wounded husband managed to retreat to outside of the house where he grabbed a flower pot and then proceeded to smash it over the boyfriend's head.

Thompson and the husband were taken to the hospital by authorities where Thompson was treated for minor injuries. The husband remains in the hospital in serious injuries sustained from the Master Sword during the fight. No information was given on the quality of the Master Sword, but most of the replicas I could find online were fiberglass, with a few high-end models being forged from steel. Either way, it is hard not to picture Thompson dashing around the house making attacking noises like in the games.

If you are unfamiliar with the legendary Master Sword, I have included an excerpt from the Zelda Wiki below.

The Master Sword, also known as The Blade of Evil's Bane, is a recurring legendary sword in the Zelda series. Originally crafted by the goddess Hylia as the Goddess Sword, it was later forged into the Master Sword by the goddess's chosen hero and its spirit Fi, who bathed it in the three Sacred Flames located across the land that would become the Kingdom of Hyrule. Din's Flame in particular, imbued the sword with the power to repel evil, a power apparently augmented after the sword received the blessing of Zelda, which transformed the blade into the True Master Sword. It is usually the only sword that can defeat Ganon in the games it appears in.

True to its name, the sword is often seen to choose or accept its master by its own will, always a hero who has gone through great trials that test his courage, wisdom and power to prove him worthy of wielding it. This may be the conscious choice of the sword's spirit, Fi, who sleeps eternally within the sword and only assists her heroic master.