Elon Musk publicly called the Tesla Model S "the safest car in America," but those claims may not be as true as everyone originally hoped. The Tennessee Highway Patrol has recently reported that a Tesla Model S was involved in a single vehicle fire yesterday in which the car was damaged after running over a piece of debris in the road. 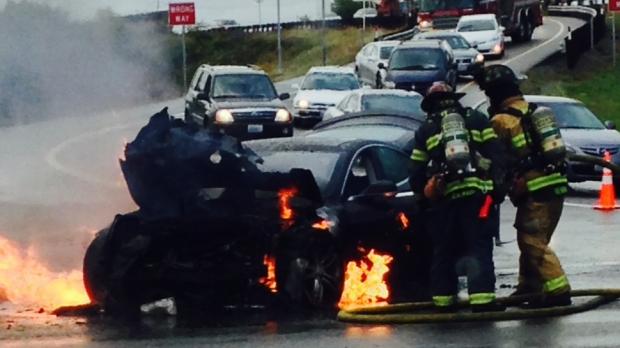 The Model S hit what is rumored to be a "trailer hitch" that was laying in the road way, which could have damaged the cars lithium battery packs. While unlikely this scenario is not that far fetched as the Model S' battery pack is contained in the floor of the vehicle and is protected from below by a thin armor plate. Earlier this fall, another Model S burst into flames after its battery pack was punctured as well.

Tesla said that it has teams on the way to Tennessee to investigate the fire, and hopes to pinpoint the cause. This marks the third Model S to catch fire this year and as a result of the fires, Tesla's stock is down more than 27-percent from its high earlier this year of $193.37. News of the fire cause the stock to fall by more than 7-percent today alone.