As an ex-professional photographer, one of the most annoying things about 90 percent of the photos posted online is the fact that they are never straight. No one seems to care about holding their smartphone in a nice in level orientation. Today, it appears that the developers over at Instagram felt the same way and decided to fix this crooked issue. 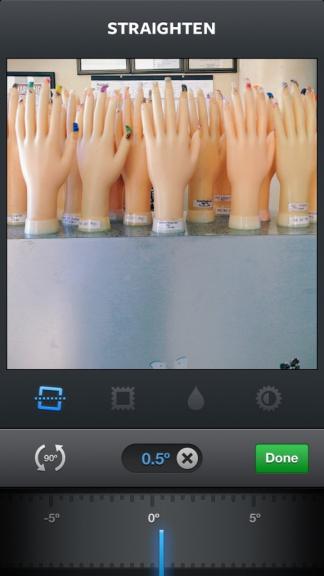 The latest version of Instagram for iOS features built-in image straightening and the best thing about it is that it can be setup to happen automatically. The developers figured out that they can collect data from the phone's accelerometer and gyrometer sensors to figure out at what orientation and the angle the smartphone was being held at at the time the image was captured and then use that data to automatically straighten the image. Below is an excerpt from a post written by Alex Restrepo on Instagram's Blog.

Most phones have a variety of sensors that allow us to determine the orientation and tilt of the device relative to a specific reference, meaning we can tell the angle of your phone at the time you took the picture. This seemed to us a way of making the feature quick and simple to use, which is something we try to achieve with every feature release...

Once you enter the straightening mode, you will notice how the photo is auto straightened in an animated way; when you tap the button the photo is rotated and zoomed in before your eyes. This animation turned out to be a very important piece of the puzzle as it helps the user understand what is happening to the photo.Once the animation is done, and in case we got the angle wrong, or in case you are simply feeling creative, you can still manually rotate the photo by dragging the wheel at the bottom of the screen. We added in other gestures for people looking to really fine-tune their pictures: if you tap on the edges of the wheel you can rotate by 0.1 degree increments. There are also two other ways to rotate the photo by using common iOS gestures: two finger rotation, or even one finger rotation, for easy interaction with just one hand.