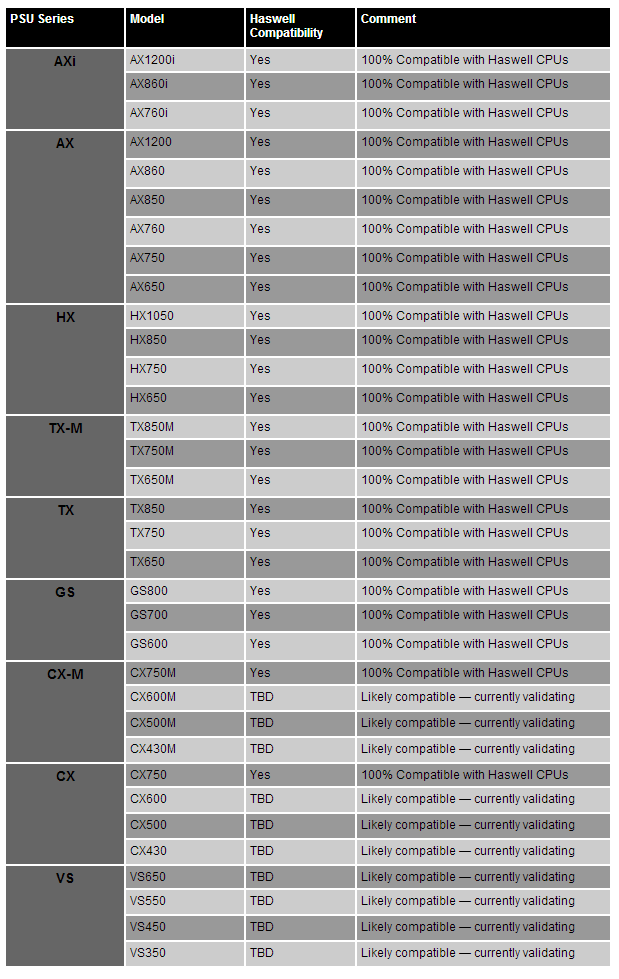 According to Intel's presentation at IDF, the new Haswell processors enter a sleep state called C7 that can drop processor power usage as low as 0.05A. Even if the sleeping CPU is the only load on the +12V rail, most power supplies can handle a load this low. The potential problem comes up when there is still a substantial load on the power supply's non-primary rails (the +3.3V and +5V). If the load on these non-primary rails are above a certain threshold (which varies by PSU), the +12V can go out of spec (voltages greater than +12.6V). If the +12V is out of spec when the motherboard comes out of the sleep state, the PSU's protection may prevent the PSU from running and will cause the power supply to "latch off". This will require the user to cycle the power on their power supply using the power switch on the back of the unit.

While we are still working with Intel on the details of the testing methodology they use to check PSUs for Haswell compatibility, it is already known that a power supply that uses DC to DC for the non-primary rails (the +3.3V and +5V) will not have an issue with the new low power sleep states. This is because a DC to DC buck converter is used to convert +12V to +3.3V and +5V. This means that no matter what load the CPU puts on the power supply, there will always be a load on the +12V because the +12V is required to provide power to +3.3V and +5V.