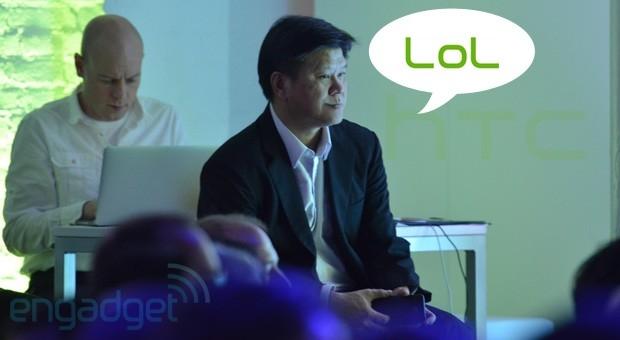 HTC followed this up by offering up the hashtag "#theNextBigFlop", taking a swing at Samsung's slogan of "The Next Big Thing". The mocking didn't end there, with HTC's CMO Ben Ho saying that the Galaxy S IV is just "more of the same", and that his company's "all-aluminum unibody HTC One" with their "original cutting-edge technology, mouth-watering design and a premium feel" is what consumers really want. His full statement:

With a continuation of a plastic body, and a larger screen being the most obvious physical change, Samsung's new Galaxy pales in comparison to the all-aluminum unibody HTC One. This is more of the same. HTC remains the best option for those people looking for the best technology wrapped in premium design. Our customers want something different from the mainstream, who appear to be the target for the Galaxy. Our customers want original cutting-edge technology, mouth-watering design and a premium feel from their mobiles, which is why we created the HTC One.

I guess we'll have to wait and see the sales numbers between HTC's One handset and the Galaxy S IV, I'm guessing they'll be somewhere in the 50:1 ratio, Samsung to HTC of course.