AMD aren't taking the graphics war sitting on their hands, with the release of their Catalyst 12.11 driver set which the company are calling the "Never Settle" driver, and rightly so by the looks of things. 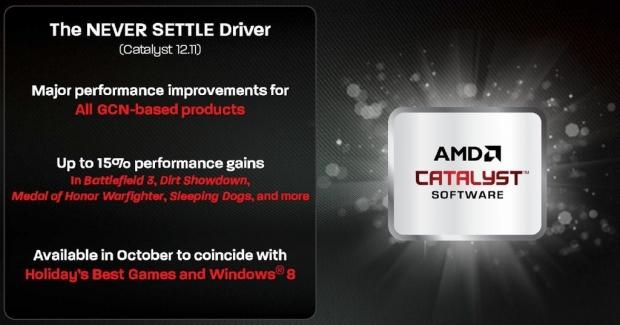 The new Never Settle drivers sport performance improvements of up to 15% in most of the latest games including Battlefield 3, DiRT Showdown, Sleeping Dogs, Medal of Honor: Warfighter and much more. AMD is now able to claim the performance lead for all of their top-end products, with the HD 7970 GHz Edition seeing a 20% performance gain over NVIDIA's GeForce GTX 680.

AMD's new drivers will be available shortly, at the moment the latest drivers on their site are still showing up as 12.8's.