Twitter conducted a study after the first presidential debate and found some interesting statistics regarding Twitter users and a possible connection between seeing political tweets and donating. Even better is the fact that the trends don't vary significantly between political affiliation, meaning that both sides can take advantage of Twitter to further campaign contributions. 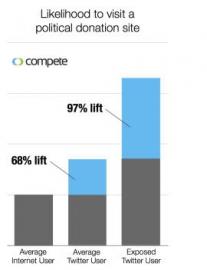 Twitter's director of political ad sales, Peter Greenberger, wrote "The lifts in donation rates by Twitter users were found to be very similar across all candidates, groups, and parties. Republican handles accelerated donations to their candidates at virtually the same rate as Democratic handles did for theirs."