Technology has done wonderful things for us, if you went back 200 years and thought we'd be here with smart devices, or even 30 years ago and told me quad-core processors would rule your smartphone, I wouldn't believe you. But, it hasn't really extended our lifespan all that much, yes health technology has improved, but not in the pure leaps and bounds that consumer-based electronics have. 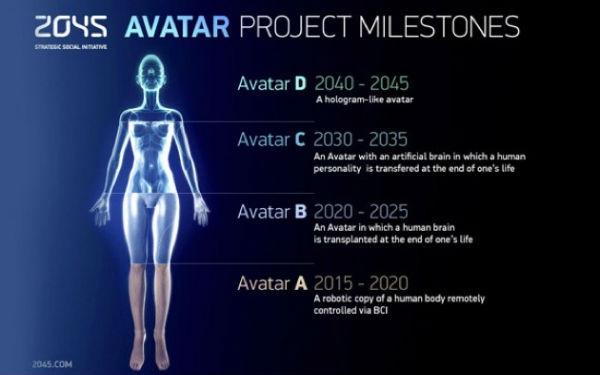 Well, a Russian billionaire wants to change that, who plans on making immortality a reality by 2045. Dmitry Itskov, a 31-year-old billionaire, has planned "The 2045 Initiative", and only needs a few billion to make it happen. Itskov's project has multiple phases, each bringing mankind closer to the dream of living forever. The first step in his plan is to create robotic humans that are controlled remotely. This step has a goal of 2020, or earlier.

By 2025, "Avatar B" happens, which is where the human brain is transferred into a robotic skeleton so that life can be enjoyed after death. By 2035 "Avatar C" begins, where the brain will be constructed separately, and your own personality will be "transferred" into the robot when you're ready to stop living life as a weak human being. By 2045, the fourth and final stage, "Avatar D" begins and gives us the option to walk around in holographic avatars, for eternity.

Itskov is going to the richest people in the world to make this happen, and in return, he's pledging to help each donor in their quest for immortality. But, what of the social and political repercussions this has? What happens to the wealth people build up over a lifetime of, well, forever? There'd be no more inheritances, no more life insurance payouts, it would radically transform the medical industry, if we're living forever, the common cold would be gone. So would the millions of other infections, diseases and education systems, the need for police, as there would be no fear of death.

Who would control such a thing? Would there be a decision maker on who gets to live forever, and who doesn't? Would it simply be the rich and famous who could afford this? Would they want every person on Earth living forever? Would Earth eventually fill up? So many questions!