avast! anti-virus invited TweakTown, along with a few other journalists, out to Prague, Czech Republic to meet the staff and check out the headquarters of the world's largest free anti-virus software company. The headquarters is really nondescript as the avast! software team is actually quite tiny considering just how many users they have. The headquarters occupies six floors in a business office shared with other companies. From the outside, all that is visible is the avast! logo on the top. 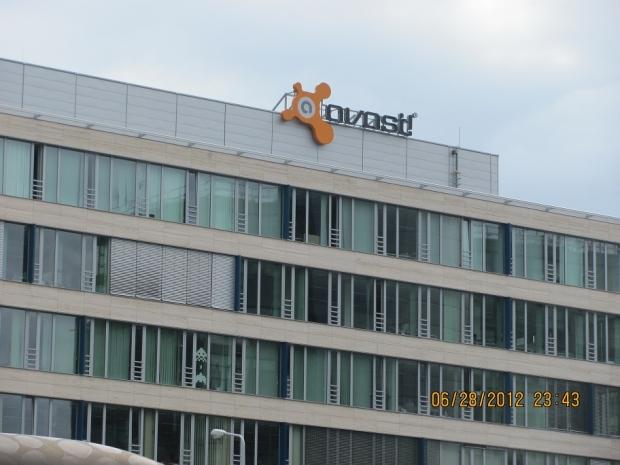 We were led upstairs to the 8th floor. Into a meeting room we went where we were greeted with refreshments, the CEO of avast!, and Milos Korenko, the Marketing Director at avast!. CEO Vincent Steckler welcomed the 9 of us to Prague and avast!'s headquarters and gave us a brief presentation about the company and some interesting, and quite frankly surprising, statistics about the use of avast!

avast! has had 161 million active and protected computers in the last 30 days. While they have over 200 million registrations, they only count computers who receive updates in a 30 day period in order to be more accurate. Considering there are around 700 million consumer PCs worldwide, avast! protects a large portion of them. Furthermore, avast! basically spends nothing on advertising. The reason they don't is because they don't have the need. Two-thirds of new users come from word-of-mouth referrals.

avast! protects over half a million computers in 48 countries and over one million computers in 31 countries. Every summer in Antarctica, avast! protects between 5-14 computers. Here comes the incredible number: $0.02. That's the cost to avast! to distribute and service each protected device per year. That means they spend less than $3.5 million each year in distribution and service and this is how they manage to keep the free version going.

However, that is enough about the product for now. There's plenty more to be shared, however, it's out of place in this piece. After the brief introduction by Mr. Steckler, Mr. Korenko gave another presentation and then led us out of the meeting room to take a tour of the offices.

The first things to strike me about the office were the meeting rooms. Each door had a seemingly interesting set of black text on the glass door. It turns out that the text is the code for the virus the meeting room is named for. For instance, in the picture below, we were in the meeting room named after the CodeRed worm and had the matching machine code inscribed on the door.

Down the hall from the meeting rooms were several other rooms featuring developers working at tables. No person had a cubicle, but instead shared a meeting room sized office with several other developers. Around the corner, the IT staff had their offices. Beyond that, there was a room which featured a billiard table and was situated right next to the kitchen. They apparently used to have a ping pong table but were forced to give up the room it was in to the lawyers overseeing their IPO.

Upstairs to the next floor we went whereupon we found the virus lab. This floor was about half the size of the previous one and the tour went much quicker. The virus lab is rarely highly populated as most of the 30 analysts work from home. Once again up the stairs, we found ourselves on floor number 10.

This floor was of similar size to the one below and was home to the offices of the financial staff and marketing staff. Again, office doors were clear glass with the occupant's (s') names written upon said door. We never did manage to see the last couple of floors that resides above this one. We were told it was home to the management staff and owners, a rather boring couple of floors in other words.

We returned to the original meeting room to gather our belongings. The PR person from avast!, Kristna Maznkov, led us back to the hotel to freshen up. She returned about an hour later and led us to a restaurant where we were to have dinner. We met some of the staff there and enjoyed a lovely dinner. Let's just say, "what happens in Prague, stays in Prague."

More coverage of the avast! visit to come.